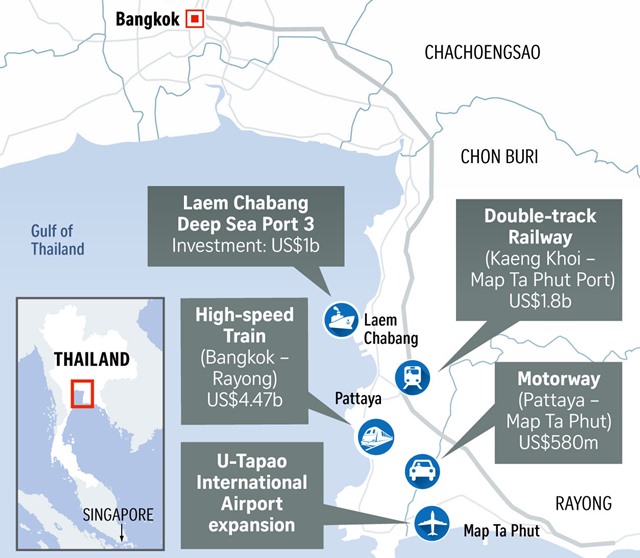 Thanks to the region’s existing strength in industry and its location, the government is positioning the EEC as the main engine of growth for Thai industry going forward.

Three provinces have been chosen to pilot the EEC: Rayong, Chonburi, and Chachoengsao, with plans to build on their current strength as a major hub for technology-based manufacturing, such as cars, electronics, and petrochemicals.

Strategically located, the area has high potential and will be able to draw investments in other industries as well. In the long run, the government hopes that the EEC will lead to sustainable growth for the Thai economy.

Development of transport infrastructure and investment incentives are key to the government’s plan to attract investments in the 10 targeted industries.

Transport is at the heart of the business.

For this reason, the government has plans to develop full-scale transport infrastructure to boost efficiency in passenger and goods transport.

Transport is at the heart of the EEC project

When completed, these infrastructure projects will greatly enhance sea exports and domestic transport, particularly the distribution of goods from eastern Thailand to the northeastern provinces by rail.

The government is also planning to roll out better tax incentives compared to neighboring countries (Figure 1) and other measures including one-stop service for the approval and issuance of permits, the establishment of a tax-free zone, and work permits and visas for international experts.

Still, a World Economic Forum survey shows that other factors affecting investor decisions that the government can work on include assurances of policy stability, innovation capacity, and development of skilled labor.

The 5 New S-Curve industries targeted for turbo-charging the Thai economic growth include Automation and Robotics (3 businesses), Aviation and logistics (8 businesses), Bio chemicals and eco-friendly petrochemical (7 businesses), Digital (11 businesses), and Medical hub (6 businesses). The New S-Curve group will push forward with advanced technology and innovation, lifting Thailand’s competitiveness in the long run. Sixty percent of businesses in this group are eligible for premium incentives (A1 and A2) from the BOI, particularly the digital and aviation…

Related Topics:EECwork permit
Up Next