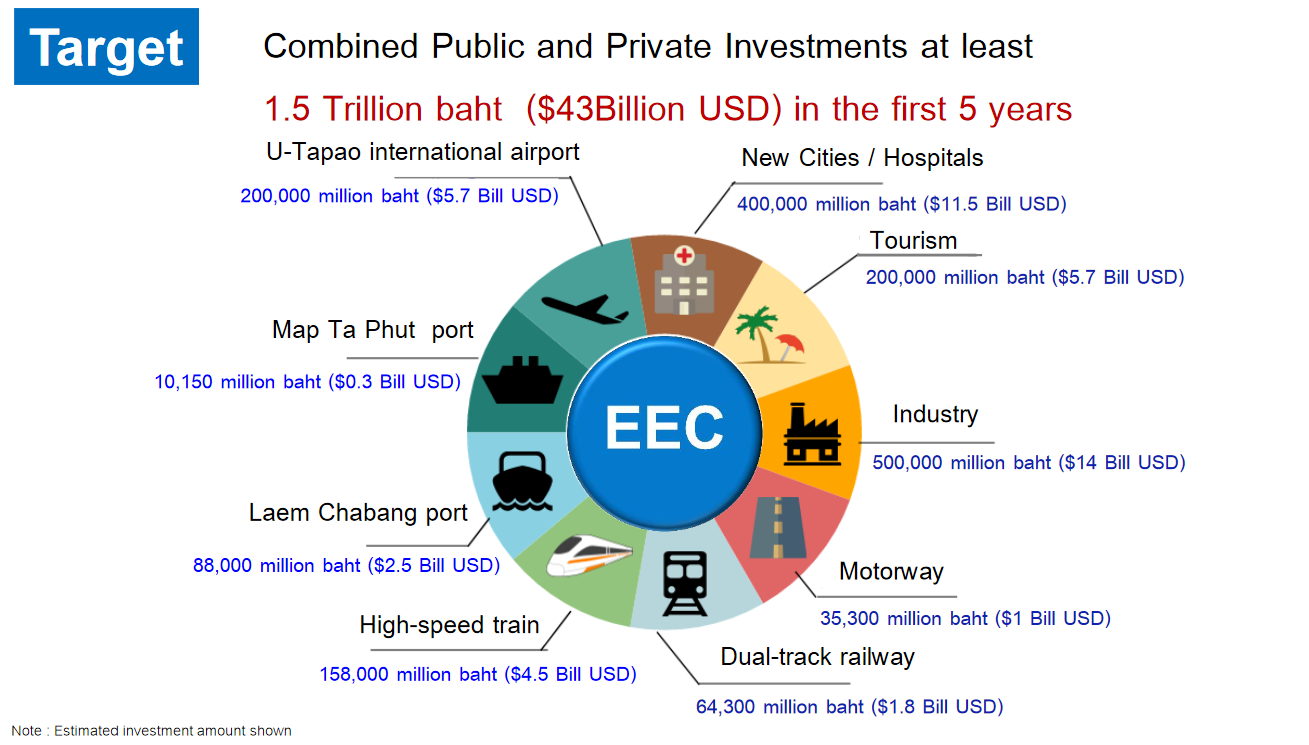 Designed to attract foreign and domestic investment to the three eastern provinces of Chon Buri, Rayong and Chachoengsao, the Eastern Economic Corridor (EEC) is the current government’s most important engine to drive its “Thailand 4.0” policy which is attempting to propel the country towards high-income status.

Even though investment is important for short-term economic growth, the ultimate goal of the EEC should go beyond that by aiming to build local technological capability, to upgrade the skills of local workers, to reform related regulations and public services, and to ensure environmental protection and the strengthening of community capability.

The EEC is located in the same area where the Eastern Seaboard development project was implemented during the 1980s. It was launched after low uptake of previous government schemes, such as Special Economic Zones in 10 border provinces and the promotion of 10 targeted industries (comprising five in the first S-curve and another five in the new S-curve categories).

To implement the EEC, the government has set out three pillars: infrastructure development, super-generous incentives, and investment facilitation.

Infrastructure development, as the first pillar, includes plans to upgrade existing infrastructure projects, such as U-Tapao airport, double-track railways and motorways, and to introduce new ones such as high-speed trains.

The second pillar is the provision of tax and non-tax incentives. Investors in the EEC get super-generous tax incentives, such as corporate income tax exemption of up to 15 years, making Thailand’s corporate tax rate among the lowest in Southeast Asia. And for the first time, personal income tax is cut to a flat rate of 17% for “world-class” specialists. Investors in the EEC also get unprecedented non-tax benefits, such as land leases of up to 99 years, freedom to trade using foreign currencies, an ability to undertake currently prohibited service business and sped-up approval of environmental impact assessment to just one year.

The last pillar is investment facilitation through a one-stop service administered by the Eastern Area Development Zone office. The office can issue many types of licences and permits to investors in the EEC zone, including building construction and commercial registration and thus rescue them from existing regulatory obstacles.

With all the above privileges, the EEC is the most attractive invitation to invest in Thailand that the Thai government has ever offered to any investors. With such promotion, the Thai government hopes that investment will pour into the country and rejuvenate the economy.

A recent study of the Thailand Development Research Institute (TDRI) points out that such generous investment promotions would indeed induce investment in some targeted industries in which Thailand has a comparative advantage. These include tourism, the automotive industry and healthcare services, as part of the five first S-Curve industries, and aviation maintenance, repair and overhaul, logistics and automation, as part of the new S-Curve industries. Some global players, such as Airbus, Toyota, Lazada and the like may even use Thailand as their regional hubs.

The TDRI study also expects that certain infrastructure projects such as the upgrade of U-Tapao airport, the doubletrack railways and the motorways are likely to be achieved as planned, even though the development of high-speed trains would face more hurdles due to their high risk and very long break-even periods.

However, foreign direct investment (FDI) attraction and infrastructure development should not be the ultimate targets of the EEC. After all, Thailand has already attracted many top global players in the past. For car makers, almost all major players from Japan, Europe and the US are already here. For electronic products, we already have two of the world’s largest hard disk drive producers, namely Seagate and Western Digital. These global players have created numerous jobs, linking Thailand to their global value chains, and transforming the country into a major Asian export hub. Yet still we are caught in the middle-income trap.

The hard lesson is that FDI attraction without building local technological capability and upgrading the skills of local workers can only take you so far. In fact, no country has ever escaped from the middle-income trap based purely on foreign investment. In addition, while the three provinces in the Eastern Seaboard become richer, the rest of the country has so far shared little benefit, making regional income disparity a big economic and political problem.

Thus, the ultimate targets for the EEC to achieve should be set as follows.

Firstly, the Thai innovation system should have more technological capability. This means local universities and research institutes should develop new technology jointly with multinational companies and local firms investing in the EEC zone. Such institutions must be taken out of their comfort zones of carrying out “blue sky” research, which has no short-term application in the real world. An alternative is to set up an industrial research institute in the EEC either by establishing a new one from scratch or transforming some units of the National Science and Technology Development Agency into one with the sole mission of developing industrial technologies.

Secondly, Thai workers should be equipped with better professional skills. In particular, local universities and vocational institutes have to work with firms investing in the EEC on manpower planning and dual education to ensure students actually obtain necessary skills. This will also ensure that our education sector is accountable to the public.

Thirdly, lessons learned from regulatory reform and integrated public service delivery in the EEC should be applied nationwide. As regulatory burdens are hindering the development of Thailand, bureaucracy in the whole country, not only the EEC, should be reformed.

Finally, to avoid the problems caused by the past Eastern Seaboard project, environment protection and community capability must be strengthened. This requires disclosure of information to the public and engagement with local communities in the policymaking process.

Saowaruj Rattanakhamfu, PhD, is Senior Research Fellow at the Thailand Development Research Institute. Policy analyses from the TDRI appear in the Bangkok Post on alternate Wednesdays.

The post What should be the real development targets for the EEC? appeared first on TDRI: Thailand Development Research Institute.