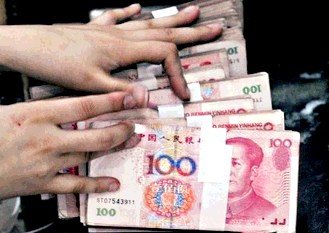 China’s central bank said on Saturday it will promote further reform of its exchange rate mechanism, but maintained there is no basis for “large swings” in the currency.


The yuan’s under-valuation stands to lower European exports and increase imports from China as spending is redirected from European produced goods to cheaper Chinese goods. The resulting increased trade deficit will directly cost jobs, and reduced demand and profitability of European manufacturing companies will reduce investment spending. Furthermore, European manufacturers will have an incentive to close plants and shift production and new investment to China, just as happened in the US.

The People's Bank of China, China's central bank, has decided to proceed further with the reform of the Renminbi exchange rate regime to enhance the RMB exchange rate flexibility, a spokesperson of the central bank said Saturday.

China has granted Bangkok Bank PCL, Thailand’s largest commercial bank, an exclusive license to clear yuan transactions in the country. The move was part of China’s attempt to expand the role of its renminbi currency in Asia, Bangkok Bank senior executive vice president Prasong Uthaisangchai told The Nation newspaper. Hong Kong will become the first yuan-clearing centre for China. There are now several banks in Hong Kong that serve in this capacity, but in general, China wants to have only one bank in one market.

China has moved into a managed floating exchange rate regime based on market supply and demand with reference of a basket of currencies since July 1, 2005. The spokesperson said the reform of the RMB exchange rate regime has been making steady progress since 2005, producing the anticipated results and playing a positive role. With the current round of international financial crisis was at its worst, the exchange rate of a number of sovereign currencies to the U.S. dollar depreciated by varying margins.

“The stability of the RMB exchange rate has played an important role in mitigating the crisis’ impact, contributing significantly to Asian and global recovery, and demonstrating China’s efforts in promoting global rebalancing,”

China’s announcement is “a very welcomed development,” Strauss-Kahn said in a statement.

The move will help increase Chinese household income and provide the incentives necessary to reorient investment toward industries that serve the Chinese consumer,”