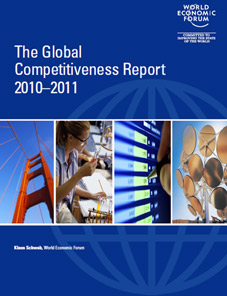 Thailand, at 38th position in the World Economic Forum’s Global Competitiveness Index 2010-2011, has fallen two places this year and 10 ranks since 2006, mainly because of the domestic turbulence.

According to the WEF, the assessment of public institutions – mainly the administration – continues to languish at 70th place among 139 countries, a drop of 30 places over the past four years, likely related to recent problems of social unrest and political instability in the country.

Thailand’s ranking is supported by the relatively large domestic and export markets (23rd), its transport infrastructure (23rd), the efficiency of its labour market (24th), and a relatively well-functioning goods market (41st). In addition, the country’s business environment is relatively sophisticated, with developed clusters (34th) and companies operating across the value chain.

Thailand, at 38th position, has fallen two places this year and 10 ranks since 2006

“In addition to urgently improving its institutional framework, the country needs to step up its effort to improve its health and educational systems and encourage wider adoption of new technologies for productivity enhancements. Such efforts will then buttress the country’s innovation potential, which will become increasingly important as it moves towards the most advanced stage of economic development,” WEF said in its report.

The index is based on the ranking in 12 pillars: institutions (the strength of public and private institutions in creating sound and fair environment to generate income and wealth in the economy), infrastructure, macroeconomic environment, health and primary education, higher education and training, goods market efficiency, labor market efficiency, financial market development, technological readiness, market size, business sophistication, and innovation.

Thailand, at 38th position, has fallen 2 places this year and 10 ranks since 2006. The assessment of public institutions continues to deteriorate (70th) after a drop of 30 places over the past four years, likely related to recent problems of social unrest and political instability in the country. However, Thailand continues to benefit from its relatively large domestic and export markets (23rd), its excellent transport infrastructure (23rd), the efficiency of its labor market (24th), and a relatively well functioning goods market (ranked 41st).

In addition, the country’s business environment is relatively sophisticated with developed clusters (34th) and companies operating across the value chain. Going forward, in addition to urgently improving its institutional framework, the country needs to step up its efforts to improve its health and educational systems and encourage wider adoption of new technologies for productivity enhancements. Such efforts will then buttress the country’s innovation potential, which will become increasingly important as it moves toward the most advanced stage of economic development.

For the third consecutive year, Hong Kong SAR retains its position at 11th overall, with a slight improvement in score. Hong Kong maintains its leadership in measures of financial market development and, for the first time, tops the infrastructure pillar. The quality of transport, energy, and telephony infrastructure is simply outstanding, with a score of 6.8 out of 7 in the pillar. In total, Hong Kong appears in the top 10 of six of the twelve GCI pillars. One of the world’s major trade hubs, the crisis hit Hong Kong quickly and strongly, with its economy growing at a subdued rate in the second half of 2008 and contracting by 2.7 percent in 2009.

But Hong Kong’s economy has proved resilient and the IMF predicts a growth rate of about 5 percent for 2010. It offers one of the world’s most business friendly environments thanks to world-class institutions, infrastructure, market efficiency, and the dynamism of its financial sector, and even slightly improves in each these dimensions. In particular, Hong Kong ranks behind only Singapore for government efficiency. Taiwan, China ranks 13th, one place lower than last year.

Taiwan ranks among the top 20 economies in nine pillars, but its performance in three of them holds the economy back from its full competitiveness potential: institutions, financial market development, and labor market efficiency. The quality of the institutional framework continues to improve although by small increments, now standing at 35th position, up from 40th in 2008. Thanks to greater efficiency, Taiwan has improved by 19 positions in the financial market development pillar to 35th, a category where it used to place below the 50th mark. The third area of relative weakness is its labor market (34th), where the situation continues to deteriorate with respect to the flexibility. Given its many strengths, improvements in these areas would make Taiwan an even more competitive economy.

Down by one position, Australia now ranks 16th, with a stable performance overall, ranking no lower than 29th in any of the 12 pillars. The results confirm the continued dynamism and high level of development of Australia’s financial market. While credit access conditions deteriorated during the financial crisis, the banking sector held out remarkably well. Australia remains a prime location for doing business, with high efficiency in both the goods market (18th) and the labor market (11th), and excellent public (14th) and private (11th) institutions. To progress even further, the country will need to increase the sophistication of its businesses (29th) and strengthen its innovation capacity (21st).

The Republic of Korea falls by three places to 22nd position. The country continues to do very well in most categories. It possesses world-class transport infrastructure (12th), a healthy macroeconomic environment at a time when many industrialized countries are struggling in this area (6th, up five positions), and excellent higher education (15th), with the highest rate of tertiary education enrollment in the world. Finally, Korea remains one of the world’s innovation powerhouses (12th in the innovation pillar). Yet Korea continues to suffer from weaknesses that represent a major drag on its competitiveness. The country ranks a dismal 124th with respect to labor market flexibility. Business leaders express dismay at the difficulty of hiring and firing employees (115th), also reflected in the World Bank’s Rigidity of employment index (90th).

What’s more, the World Bank estimates that the average severance pay for dismissing an employee is equivalent to 91 weeks worth of salary (placing Korea 114th on this indicator). This leads companies to resort extensively to temporary employment, thus creating precarious working conditions and giving rise to tensions—Korea ranks 138th, ahead only of Venezuela, for the difficult relations between employers and workers. The second area of concern is the country’s financial market (83rd), where the assessment has considerably worsened over the past year. Access to credit and financing has become more difficult, and the business community continues to express doubts as to the soundness of the banking sector (99th) and complains about the limited availability (98th) and high costs (82nd) of financial services.

Thailand to collaborate with China to improve rail system