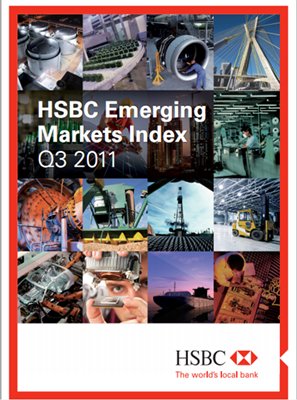 Emerging market growth slowed to its weakest level in nine quarters in the third quarter of 2011, reflecting the continued decline in world trade volumes, the HSBC Emerging Markets Index (EMI) shows.
The EMI slid to 51.9, down from 54.2 in the second quarter, the fourth-lowest reading in the series history.
Sluggish developed market demand led to reduced output from almost all emerging markets surveyed.

“It is now apparent that world trade growth peaked in the first quarter. Companies in the emerging world have reacted by clearing their order backlogs at a faster rate than before, helping to support activity near-term. But in the absence of any quick rebound in trade momentum, the weakness revealed in this latest EMI is likely to show up in future employment losses. Already, jobs growth in the emerging world appears to have stagnated.

“While emerging nations do not face the same deleveraging imperative as the developed world, they nevertheless suffer their fair share of contagion in an increasingly “risk-off” environment. While, over the long-term, there is clear evidence of economic de-coupling, there is not much evidence of financial market de-coupling on a day-to-day basis.

“Abating inflationary pressures creates a little more room for policy flexibility but it would be wrong to conclude that emerging nations are about to launch stimulus on a scale similar to that seen in 2008/09. It therefore seems increasingly likely that emerging nations will not be able fully to offset the endemic weakness in the developed world, implying that the pace of global economic growth will remain well below 3% in both 2011 and 2012, a disappointing performance relative to past history, notwithstanding the sound underlying economic fundamentals on offer in many parts of the emerging world.”

Eastern European manufacturers generally fared better than emerging Asia firms during Q3, but all saw production growth moderate over the quarter. Russia recorded only a marginal increase in factory output, while rates of expansion slowed to recent lows in the Czech Republic and Poland. Meanwhile growth in Indian manufacturing slowed to a two-and-a-half year low. Conversely, Turkey and Israel were the only emerging market manufacturing sectors to record a faster increase in output levels.

Against a backdrop of muted global demand, emerging market manufacturers reported lower volumes of new export business for the first time in nine quarters. Foreign order levels fell across the majority of markets, with the Czech Republic, Saudi Arabia and UAE the only exceptions. Of the big-four emerging markets, Brazil and India recorded the fastest rates of decline in new export orders, while China registered only a marginal reduction.
Service sector activity growth eased to a nine-quarter low in Q3 2011, with rates of expansion slowing across all of the big-four emerging markets. When questioned about the prospects for activity over the next year, emerging market service providers expressed the third-lowest degree of optimism since data were first compiled in Q4 2005. Business confidence dipped to a series-record low in China, while Russian service sector firms were the least optimistic in ten quarters.

In a continuation of a trend observed over recent EMIs, the latest survey provides further evidence to suggest that persistent policy tightening across the emerging world has contributed to weakening inflation pressures. The rate of input cost inflation eased to a four-quarter low across EMI markets. Of the largest emerging markets, Brazil (two-year low), China (slowest in four quarters) and Russia (weakest in one-and-a-half years) all recorded slower increases in average costs. With input price inflation weaker, emerging market companies raised their output charges at the least marked pace for a year, with rates of increase easing across both services and manufacturing.
With inflows of new business increasing at a reduced rate, companies ate into their backlogs of work to help sustain activity levels, suggesting an element of spare capacity across the emerging world.

Consequently, employment growth as measured across manufacturing and services eased to the slowest for nine quarters, reflecting a weaker rate of job creation in services and a stagnation of manufacturing employment. India recorded a decrease in headcounts for the first time since Q1 2009, while Brazil, China and Russia all recorded weaker rates of employment growth.
The HSBC EMI is calculated using the long-established PMI data produced by global financial information services company Markit. HSBC announced a partnership in 2009 with Markit to sponsor and produce a number of emerging market PMIs.

The HSBC EMI is released quarterly and is available via:
www.hsbc.com/emergingmarketsindex