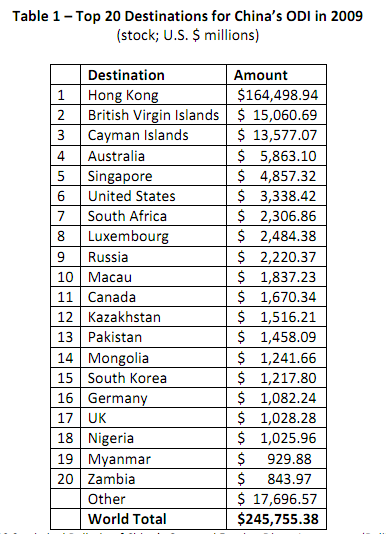 China’s investments abroad are growing despite an overall decline globally in foreign direct investment (FDI) following the 2008 financial crisis. That trend in Chinese investments abroad is likely to continue, since China’s huge foreign exchange reserves are an increasing source of mobile capital and is a key part of China’s official government policy.

The receipts from China’s existing global investments, combined with mounting trade surpluses, have made China the world’s largest capital-surplus economy.

As China’s economy continues to grow, it faces shortages in almost all raw materials

Although China’s outward direct investment (ODI) is still small relative to its massive inward FDI, China’s overseas companies have been gaining momentum in moving international capital, investing across a broad spectrum of sectors ranging from natural resources to manufacturing to telecommunications and many others.

A significant share of Chinese investments is directed through tax havens, making it difficult to discern the ultimate destination of those fund

As China’s economy continues to grow, China faces shortages in almost all raw materials, particularly in oil, iron ore, aluminum, and uranium, and it must therefore build trade linkages with Australia, Russia, Brazil, and other resource-rich countries to secure supplies.

By the end of 2009, China’s cumulative FDI abroad (stock) 4 reached $245.75 billion. 5 Growth in China’s ODI flows has become very significant in recent years, going from less than $100 million in flows in the 1980s to $56.53 billion in 2009 (the latest comprehensive figures available), making China the fifth largest originator of ODI, by volume, from the 12 th position.

The rapid development of China’s ODI activities reflects not only its economic maturation and integration into the global marketplace but also its need to expand overseas to supply China with natural resources, new markets, and advanced technology. In 2010, investors looking for overseas deals and based in China and Hong Kong accounted for a tenth of global deals by value, including investment in oil and iconic industry takeovers, such as Zhejiang Geely Holding Group’s purchase of Ford Motor’s Volvo unit.

Accurately describing the nature of China’s investments abroad is a challenge.

A significant share of Chinese investments is directed through tax havens, making it difficult to discern the ultimate destination of those funds. Different countries also employ different definitions of foreign direct investment, creating comparability problems. In addition, statistics released by the Chinese Ministry of Commerce (MOFCOM) and the State Administration for Foreign Exchange (SAFE) reflect government-approved investment projects rather than actual money transfers.

Projects that do not receive official approval therefore do not show up in Chinese statistics or in international ones, since most international statistical compilations, such as the $0 $10,000 $20,000 $30,000 $40,000 $50,000 $60,000 US $ million Chinese ODI Flows (1982-2009)3 World Investment Directory compiled by the United Nations Conference on Trade and Development (UNCTAD), rely on MOFCOM statistics.

Year-to-year changes in FDI definitions or in reporting practices in some countries also make it difficult to look for trends even in Chinese FDI practices in a single country. With these caveats in mind, it is possible to draw several broad conclusions about Chinese outward FDI practices. First, recent years have seen a dramatic increase in Chinese outward FDI and an even larger potential for growth.

China has a surplus of savings, which today are mostly recycled into rich countries.

So far, China’s sovereign wealth funds and its central bank act as portfolio investors, buying bonds, such as U.S. Treasury securities 10 and the debt of Fannie Mae and Freddie Mac. 11 These investments, however, bear low interest rates, and so China has been seeking alternatives to diversify its investments and realize higher returns.

Second, Chinese outward direct investment is widely dispersed and spread in relatively small amounts. Ministry of Commerce statistics show that as of 2009, there were Chinese overseas investments in 177 countries or territories (including Hong Kong and Macau). 12 Many of these equity investments are less than $10 million.

The Association of Southeast Asian Nations (ASEAN) shows that within receiving countries, Chinese FDI is often subdivided among different sectors, with each of several sectors receiving small amounts of FDI (less than U.S. $1 million per sector, and sometimes as little as U.S. $10,000).

China has significant investments in the developed world, in contrast to the historical pattern of developing countries running large trade deficits and carefully husbanding hard currencies. The Chinese style of overseas investment also bucks international trends in another way.

This trend has been masked by high-profile Chinese overseas investments that have generated media attention and public alarm. China National Offshore Oil Corp.’s (CNOOC) failed bid to buy Unocal in 2005, for instance, was atypical both in the size of the investment that it would have represented, and in the attention that it attracted.

Finally, Chinese outward investment activities are often directed by the Chinese government, especially for firms in deals involving oil and minerals or telecommunications, which are required by the government to remain under government oversight or control. Chinese governments at various levels often appoint executives in such Chinese firms and finance the deals through state banks.

The Chinese government’s support for these industries includes a variety of subsidies as well as access to low-cost financing from the largest banks, all of which are state owned. In 2008, even as global ODI fell by 15 percent as a consequence of the financial crisis, Chinese ODI flows more than doubled.In 2009, when global ODI plummeted by 43 percent, Chinese ODI, buoyed by Chinese government financial support, still managed to grow by 1 percent. 19 (See Appendix I for a list of China’s recent outward investment deals.)

Thailand plans Big Celebration for Chinese Year of the Dragon