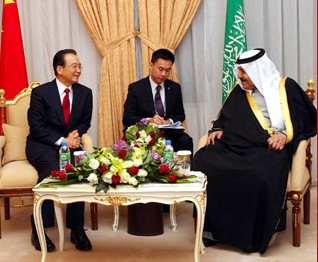 The advantage is mutual: The Middle East has great reserves of oil, and China’s foreign-policy based on non-interference in other countries’ internal affairs is popular with the region’s authoritarian regimes.

So China rejects Western efforts to impose sanctions to stop the Iranian nuclear program. Beijing is the largest buyer of Iranian petroleum, accounting for 20 percent of Iran’s exports, explains author Dilip Hiro. He reviews recent history of US attempts to impose sanctions on Iran even as Chinese firms were in the midst of negotiating multiyear oil and gas deals.

There is consensus among a network of Chinese think tanks, Hiro reports, that “Iran is a rising power in the Middle East, gaining influence at the expense of America.” So far, trade has trumped political concerns, as China makes deals with post-revolution Libya and even Iran’s longtime opponent Saudi Arabia. Still, China could be taking a gamble by counting on consistent foreign policies from the Middle East. – YaleGlobal

via China Courts The Middle East.