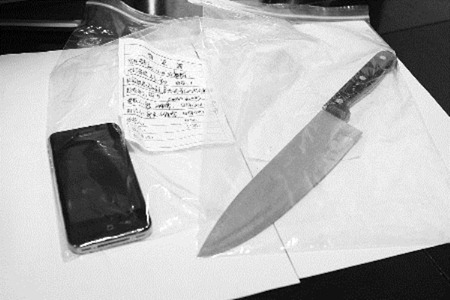 February 28, at noon, a murder happened near the 27 Plaza in Zhengzhou city.  Two hours later, the police arrested the suspect Mr. Feng.  Reporter learned from the police station, 29-year-old Feng had bought a fake Apple IPhone from a dealer in the street.

When he found out that the IPhone was fake he carried a kitchen knife with him to the plaza, and was looking for the crook seller in the 27 Plaza for several days. In the process of looking for the person sold him the phone, he bumped into another group of fake cellphone dealers and started a dispute with them.  In rage, Feng stabbed one of them to death with his kitchen knife.

Netizen first posted an entry on Weibo, “12:50 pm, murder near the 27 Plaza” and a picture, one man lying on the floor covered with blood. At 1:07 another entry “Life is too fragile and short, when 120 and the police came it was too late.”

Reporter learned from the police station, major artery was cut on victim Li’s right leg, Li died of excessive bleeding.  Another victim named Zhang Guofeng was sent to the hospital.

On February 25, when Feng was looking at cell phones at a mobile phone shop in the 27 Plaza, a man approached him with an Apple IPhone.  He said it was a genuine Apple IPhone, he could take it too the Apple retailer for verification if Feng doubted him.  Feng took a look at the phone; it looked exactly the same as the IPhone.  After some bargaining, the two agreed on the price of 2000 yuan.

The man then asked Feng to wait there and he would go get a new phone for him. A few minutes later, the man handed over Feng a “new Apple iPhone” to Feng with a cell phone cover on it.  Feng was very satisfied that the seller even gave him a sell phone cover for free.  The seller took the money and left in a hurry.

After the man was gone, Feng opened his new phone and noticed it was very different from a real IPhone, and then he realized that he was deceived, but that man had disappeared without a trace.

Access your Google searches on every mobile device you own