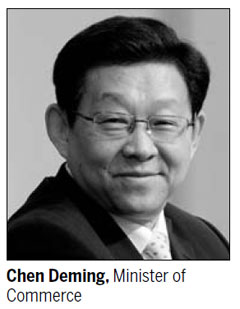 Editors’ Note: China’s current priority is to shift from an economy overly dependent on government investment and foreign trade to one featuring balanced growth that relies more on domestic consumption. However, this does not mean that foreign trade is no longer important or that it can be left to decline.

“Retail sales grew by 15 to 18 percent annually in recent years, faster than the GDP growth rate. If not for this unique scenario that China created during its development, the world would have a much more difficult financial crisis to cope with,” he said.

The nation’s exports and imports were basically balanced in the past three decades, with a large trade deficit in the beginning, then a trade surplus. Foreign trade has become increasingly balanced in recent years, according to Chen.

Chen said that unbalanced social development led to frequent financial crises in the past decades. Balanced trade growth in China and abroad is of great significance when the world economy is struggling for a recovery and the debt crisis in the European Union is still deepening.

Chen said that a comprehensive view should be taken in evaluating whether an economy’s growth is balanced. Economic balance, in a narrow sense, refers to whether international trade, overseas investment and immigration, as well as the balance of international payments, are balanced.

But in a broad sense, resource utilization, wealth distribution, capacity to consume, education, pensions and healthcare are all included in judging whether an economy is balanced, because of their influence on people’s lives and development.

Chen called for controlled or limited unbalanced economic growth, as well as an open mind regarding the rise of emerging economies.

“Against the background of globalization, a country’s unbalanced economic development, if out of control, will not only affect itself but also bring negative, or even disastrous, effects to other countries and the world economy, and in return worsen the unbalanced economy, which can be clearly reflected in the current expanding financial crisis,”

He added that the rise of emerging economies is the result of globalization and means more opportunities than challenges for developed economies.

“Some developed economies restrain their exports to emerging markets and limit investments from emerging economies, or even turn to trade protection measures, which is unfair and brings negative effects to domestic consumers and companies,” Chen said.

In recent years, China’s trade surplus has been narrowing, but the trade imbalance between China and the United States has been expanding.

“The US should expand its exports to China to resolve the (problem). But it did not follow this practice, though it spoke many times of loosening export restraints against China,” Chen said.

China to become 2nd biggest market after US for Starbucks