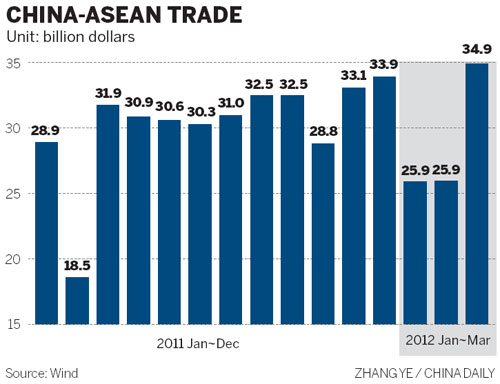 The members of the Association of Southeast Asian Nations will together become China’s top trading partners within the next three years, a trade organization predicted on Wednesday.

During that time, trade between China and the association, also known as ASEAN, will increase at a faster rate than that between any two other major economies, said the China Council for the Promotion of International Trade.

“Thanks to zero tariffs, preferential trade policies and geographic advantages, both the increasing speed and scale of that trade will be in the forefront globally and ASEAN will become China’s No 1 trading partner by 2015,” Zhang Wei, vice-chairman of the trade organization, told China Daily during the Sixth Chinese Enterprises Outbound Investment Conference held by the council.

Driven by soaring market demand, the value of trade between China and ASEAN countries is expected to exceed the goal of $500 billion by 2015, Zhang said.

ASEAN is made up of Brunei, Cambodia, Indonesia, Laos, Malaysia, Myanmar, the Philippines, Singapore, Thailand and Vietnam.

China has a free trade agreement with ASEAN. Taking effect in January 2010, it established the third-largest free trade area in the world, just behind the European Union and the North American Free Trade Area.