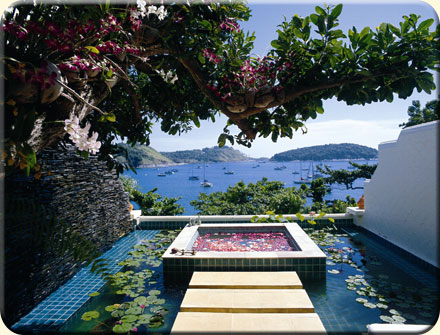 Russian and Chinese buyers are snapping Phuket properties according to Knight Frank Phuket agency, but most of the customers who purchase mid to high-end properties in Phuket are investors and expats who reside in Hong Kong and Singapore, said Mr. Nattha Kahapana, Executive Director, Knight Frank Phuket Co., Ltd

He recently commented on the Phuket market, saying that 100 percent of the hi-end market in the province is comprised of foreign buyers, who, based on available statistics, mostly travel to Phuket by air.

There are a total of 20 international airlines that fly directly into the island (this includes regularly scheduled flights, and not private planes or chartered flights).

There is a similar volume of tourists to the province every month, with increases from October to March during the high season. This affects Phuket’s tourism businesses; new restaurants are briskly launched. The official launches of new home and condo projects also pick up during this time to leverage the higher volume of investors and tourists to the island.

The composition of foreign nationalities that make up buyers and investors in Phuket, based on immigration data by top 10 countries of origin, include:

The Phuket resort residential sales market has moved in phases since the 1990s but has experienced a slow down since the 2008 global crisis, given the market’s dependence on foreign demand. CBRE believe the market is now ripe for another positive phase of development which is characterised by changes in the key players, the product, as well as the buyers’ profile.

Previously, smaller foreign developers have dominated the market pre-2008. These developers were generally less well funded and relied on buyers’ deposits for construction. Post the global crisis, the developers found it difficult to survive in a competitive market with weaker buying demand, consequently many projects were suspended or put on hold.

Today, the market is driven by larger-scale professional developers, both Thai and foreign; many of which are publicly listed Thai companies. The shift in key players is an important element which helps to raise the degree of the market’s professionalism. Many Thai developers have had interests and launched developments in Phuket. For example, Supalai, SC Asset, Sansiri, Land & House and Plan Estate have all been involved in the Phuket market, but their primary focus has been affordable mass market products which primarily target the local market, not the resort home market.

This year, a number of established Thai developers have turned their head to Phuket and in particularly, targeting the resort home market. These developers include Sansiri and Amari Estates (a subsidiary of Ital-Thai). Both developers will soon be launching condominium projects which will predominantly target foreign buyers.

Along with the shift in key players, growing tourist numbers also mean a greater potential for new sources of resort property buyers and the new range of buyers from destinations such as China and Russia bear this out.

Buyers’ profile will also be influenced by the direct accessibility from new destinations. For example, Emirates will begin operating direct flights from Dubai commencing 10th December. This is in addition to Qatar Airline’s direct flights from Doha. With convenient access from the Middle East, this segment will make up a more significant proportion of the island’s tourist arrivals, and possibly future demand for residential properties.

The buyers’ profiles are shifting and through enquiries generated, CBRE tracks the shift and sees the growing importance of Asian buyers, as opposed to the European markets which previously made up a significant portion of Phuket’s demand.

Growing opportunity for developers to tap into the Thai market

Whilst Phuket will continue to be driven by foreign demand, we do see a growing opportunity for developers to tap into the Thai market. Aside from products targeting the mass market, we have seen limited Thai interest for resort homes in Phuket. However, this may be set to change as key Thai developers are entering the market.

These developers will bring with them an extensive Thai client base and following who may not have previously considered purchasing in Phuket otherwise. For example, Sri Panwa’s initial phase which was launched in 2004 did attract a number of Thai buyers mainly on the back of the developers’ established reputation in the Bangkok market.

In addition to the constantly evolving buyers’ profile, affordability has become an important consideration for buyers, particularly for the resort condominium market. Tracking CBRE’s enquiries, we see stronger demand for the THB 5 to 15 million price range.