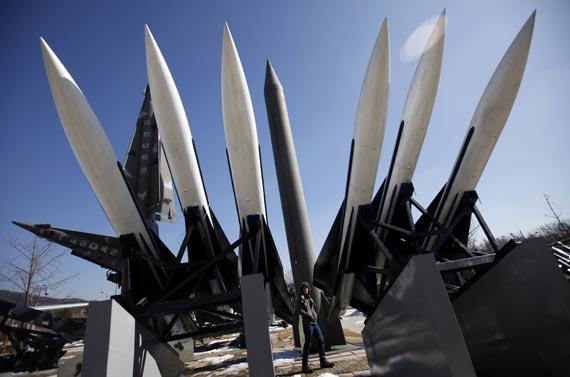 A time-honored tradition that is performed in the United States during every Korean crisis is the one where analysts gather around news cameras and speculate over whether this crisis will finally convince China that its interests are in perfect harmony with the United States’ own when it comes to the North Korean regime.

That being said, this speculation has been particularly feverish during this year’s Korean crisis owing to the fact that there are new leaders in Beijing and Pyongyang and many reports suggest they have not gotten along particularly well thus far.

Sure, there have been troubling signs that Chinese thinking on North Korea maybe hasn’t changed at all—such as Chinese academics getting censured for merely suggesting that supporting North Korea is no longer in China’s national interest— but inconvenient facts like this shouldn’t be allowed to undermine the hope which serves as the foundation for so much of America’s foreign policy.

And so the stage was set for the Western media to jump on anything Xi Jinping said during his keynote address to the Boao Forum this weekend as evidence of China’s supposed change of heart on North Korea.

The line that produced headlines like “China rebukes North Korea,” and “Is China ready to abandon North Korea?” came in the middle of a long stanza when Xi said, “No one should be allowed to throw a region and even the whole world into chaos for selfish gains.” At no point in the speech was North Korea or the tensions on the Korean Peninsula even mentioned.

To be sure, the cryptic language that Chinese leaders use can be difficult to decipher

And of course Xi may have been intending to single out and rebuke North Korea with this comment.

At the same time, to interpret this comment as a clear rebuke of North Korea is unwarranted. To begin with, Chinese diplomats have traditionally handled their differences with North Korea largely behind the scenes. At least on a bilateral basis it would be highly unusual for China to publicly rebuke North Korea.

In fact, there is at least as much reason to think that Xi was actually talking about the U.S. For one thing, only the U.S. has the capabilities to destabilize the “whole world” for what China perceives as selfish gains.

Additionally, while the U.S. and its allies were obviously most concerned about the rhetoric coming out of Pyongyang, it seems quite reasonable to assume Beijing was more worried about all the military hardware the U.S. was deploying in response. Not only can these same weapons be used against China, but Beijing was probably concerned that they would paint Pyongyang into a corner. Indeed, the U.S. itself eventually came to this conclusion.

Furthermore, elsewhere in the speech Xi said, “Asia should welcome non-Asian countries to play a constructive role in ensuring stability and development of the region. Likewise, the non-Asian countries should respect Asia’s diversity and its long-standing tradition of cooperation [emphasis added].” It’s safe to assume Beijing does not see the U.S. flying nuclear-capable bombers near North Korea as playing a constructive role in the region or respecting the diversity North Korea’s political system brings to the Asian region.

The importance Xi placed on respecting diversity was reiterated at other points in the speech such as when he stated, “The ocean is vast because it admits hundreds of rivers. We should respect the right of a country to independently choose its social system and development path, remove distrust and misgivings and turn the diversity of our world and difference among countries into dynamism and driving force for development.”

Moreover, the line that was reported at great length in international press stories was followed by, “With growing interaction among countries, it is inevitable that they encounter frictions here and there. What is important is that they should resolve differences through dialogue, consultation and peaceful negotiations in the larger interest of the sound growth of their relations.”

It has been the Obama administration that has (rightly) been opposed to entering into talks with North Korea until it perceives some sort of change from Pyongyang. In fact, the running assumption has been that North Korea’s actions are driven at least in part by its desire to force the U.S. to return to the negotiation table.

None of this should be construed to mean that Xi Jinping was singling out the U.S. while absolving North Korea of any responsibility for the current tensions. If anything I think that Xi’s statement was likely intended to apply to both sides of the crisis given that China’s ultimate goal is to return to the status-quo that existed before the crisis began. Then again, he may not have been speaking about the current crisis at all.

Whatever the case may be, I see little reason to believe he was singling out North Korea for rebuke.

Zachary Keck serves as assistant editor of The Diplomat.

Jailbreaking in China shrinks Down to 32.3% of iOS Devices