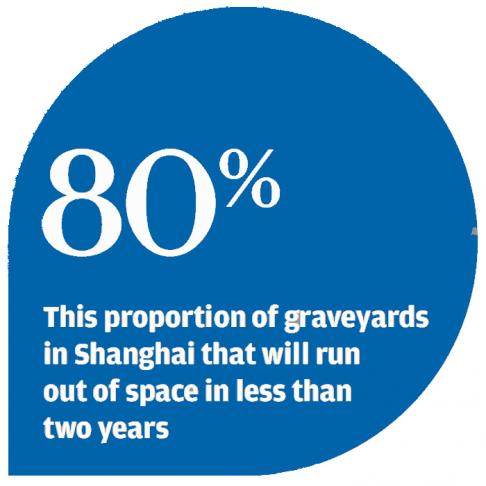 The battle for land in Shanghai is entering a tumultuous new phase as the city faces the need to allocate more space for the dead amid soaring prices of burial sites.

A tomb site of less than one square metre in Shanghai now carries a price tag of as much as 50,000 yuan HK$62,155 – more than double the average 22,500 yuan per square metre paid for a home in the city at the end of last year.

The soaring prices of burial sites come against a backdrop of tight land supply and have triggered mounting concerns over the local government’s land policies, particularly among the city’s senior citizens who face the prospect of having to provide for their burials.

A tomb site buying spree took place early this month during the Ching Ming festival – the traditional time for visiting the graves of ancestors.

“It seems that a jump in the price of a tomb turned out to be more frightening than a jump in housing prices,”

“As long as we can afford to do so now, we are seriously considering buying a tomb. Otherwise we fear we may not be able to afford to die if the price keeps climbing.”

via Expiring gets expensive as Shanghai cemeteries fill up | South China Morning Post.