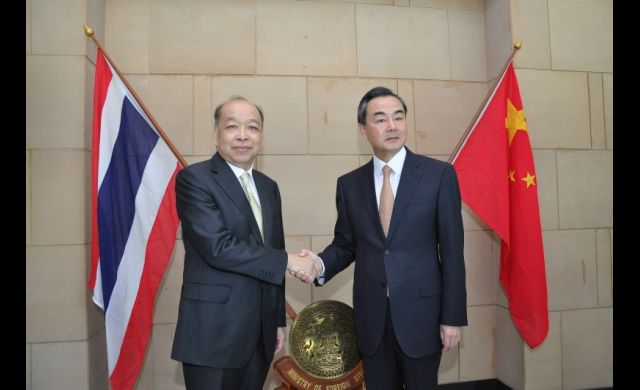 Thailand and China will develop trade relations to reach a combined value of US$100 billion in the next three years, the Thai deputy prime minister/foreign minister said on Wednesday to MCOT News agency.

Surapong Tovichakchaikul said China is keen on investing in water resource management and development of Thailand’s infrastructure under the Bt2 trillion borrowing programme.

Thailand and China will develop trade relations to reach a combined value of US$100 billion in the next three years. Photo : MCOT News agency

He said after a two-hour meeting with his Chinese counterpart Wang Yi that the two countries are interested in jointly developing a high-speed train line in Thailand while cooperation on tourism has been successful with 2.8 million Chinese visitors to the kingdom last year.

The number of Chinese tourists should reach three million this year, he said. Mr Wang Yi also informed the Thai deputy prime minister that China will permit Lin Ping, a Chinese panda born in Thailand, to stay after the lending term agreement expires soon. It’s time for the panda to return to China for mating but China will allow Ling Ping to stay longer, he said, adding that representatives of the Chinese Forestry Department will meet with the Thai Ministry of Natural Resources and Environment on the issue. MCOT online news