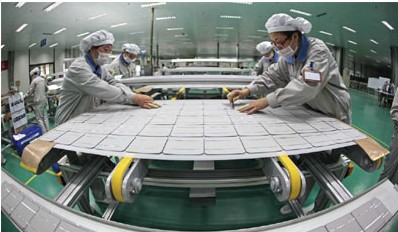 Increase will exceed EU, US and Japan combined, says IEA report. China will see the biggest absolute increase in power generation from renewable energy in the next 20 years, more than the increase in the European Union, the United States and Japan combined as the country faces a serious battle against pollution, the International Energy Agency said.

China will be the strongest driver in the global trend where renewable energy will account for nearly half of the increase in global power generation by 2035, with variable sources, notably wind and solar photovoltaics making up 45 percent of the expansion, the Paris-based energy agency said in its annual World Energy Outlook report released on Tuesday.

The increase in power generation from renewable energy will then take a share above 30 percent in the global power mixture, drawing ahead of natural gas in the next few years and reaching the same level as coal as the leading fuel for power generation in 2035, according to the report.

“The good news for China playing an active role in developing renewable energy is that it will help decarbonize the global energy system,” said Fatih Birol, the IEA’s chief economist, in an interview with China Daily.”The main challenge for global renewable energy today is that it is costly.

If China builds a lot of renewable energy projects, it will help bring down the cost and enable it to compete with traditional sources of energy, namely coal and gas,” he said.Earlier reports said that China plans to invest 1.85 trillion yuan ($303 billion) in the renewable energy sector as part of its effort to curb the increasingly serious air pollution.The country has pledged to reduce its carbon emissions per unit of GDP by 40 to 45 percent by 2020 from the 2005 level and increase the non-fossil energy consumption to 15 percent of its energy mixture, according to the National Development and Reform Commission.

.See the rest here:
Renewable energy set to steam ahead

China is aiming to be the world’s largest new energy vehicle market by 2020 with 5 million cars. Available energy is insufficient to run at fully installed industrial capacity, and the transport system is inadequate to move sufficient quantities of such critical items as coal. Its mineral resources are probably among the richest in the world but are only partially developed. China’s exploitation of its high-sulfur coal resources has resulted in massive pollution