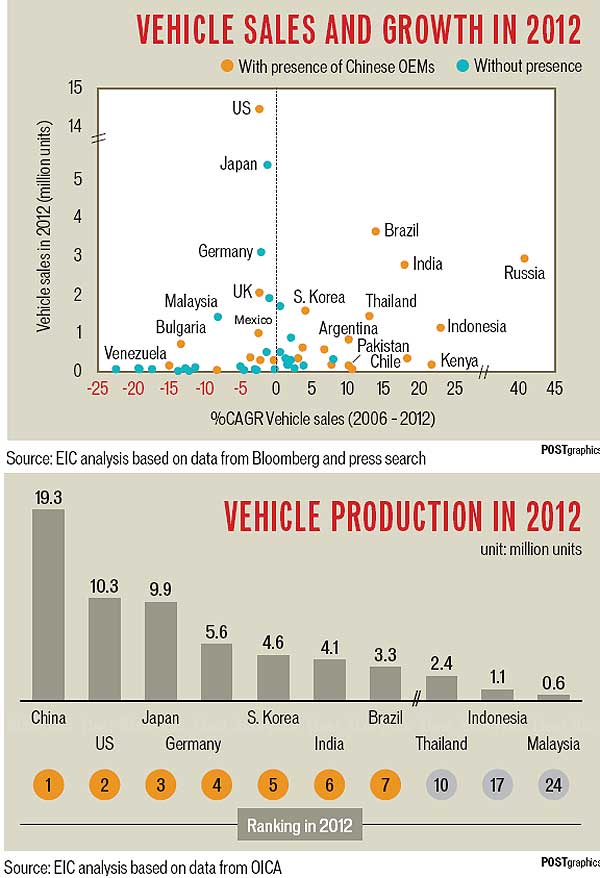 Thailand’s claim to be the “Detroit of the East” is true enough in Southeast Asia. But China’s car industry is vastly larger, indeed almost twice as big as that of the United States, producing 19 million vehicles in 2012, the most of any country.

About half of the vehicles made in China carry Chinese nameplates, but these are still little known outside the mainland because only about 5% of China’s total car production is exported.

China might be an export powerhouse, but until the past couple of years, its carmakers focused almost entirely on the vast domestic market, which grew at a fast 20% per year during the first decade of the millennium.

As demand soared and the industry grew, automobile companies got government help including subsidies and a cut in sales taxes. But expansion slowed to about 3% annually starting in 2010, and foreign brands won most of the growth. The big Chinese carmakers managed to hang on to market share, but smaller players lost ground.

Competition at home has forced Chinese nameplates to go global, especially in emerging markets in Africa and Latin America. For example, Geely, the passenger car company that bought Volvo from Ford in 2010, kept its revenues growing at 24% per year from 2009 to 2012 by focusing on exports, especially to Russia, Iraq and Saudi Arabia.

however, and Thailand is likely to become a key destination in coming years for both exports and assembly plants. Already Sunlong claims to have the largest annual market share in sales of buses in Thailand, such as coaches fuelled by liquefied natural gas.

Last year, China’s largest carmaker, SAIC, announced a joint venture with Thailand’s CP Group to assemble cars in Thailand under the MG marque, the British brand sold to Chinese owners in 2005. Production is slated to start with 50,000 units this year.

Great Wall Motors, known for pickup trucks and sport utility vehicles (SUVs), was also looking to invest $300 million a plant in Rayong with annual capacity of 100,000 vehicles. However, last week it said it was putting its plans on hold because of concern about the country’s protracted political standoff.

Chinese vehicle companies are coming to Thailand because it has the biggest car manufacturing industry in Asean, producing about 2.5 million units in 2013, including 1.1 million for export. Indonesia has a larger domestic market, but Thailand is a better base for accessing the fast-growing, underpenetrated Southeast Asian market overall, especially the Mekong region.

A larger presence by Chinese automakers would likely benefit Thailand in several ways. More competition in the marketplace would give consumers better options. Diversification of the industry here would generate new orders and partnership opportunities for local parts makers, while strengthening the sector overall and creating jobs.

But Chinese carmakers face challenges in Thailand, especially in terms of consumer perceptions of quality. Thai car buyers are more demanding than those in most other emerging markets, and marques from China and India have struggled to gain acceptance here.

As for manufacturing here, the supplier networks are dominated by Japanese brands and their partners, making it harder for Chinese players to break in.Chinese brands are taking the quality issue seriously, such as by increasing R&D and acquiring respected European nameplates.

While aiming to reach top international product standards in the long term, the carmakers are seizing opportunities to penetrate new markets not already dominated by Japanese and European brands. The strategy is to offer comparable quality at lower prices.

Chinese automakers can use their size and financial strength to target the product niches that offer the best opportunities. For example, the SUV segment is growing at 19% annually, yet with relatively few players and models. Buses and heavy trucks are promising segments, with yearly growth at 21%, and the market for commercial vehicles is less driven by brand perception.

It might not take long for Chinese carmakers to build brand credibility in Southeast Asia. Think of Hyundai’s efforts in the big and highly competitive North American market. After deciding to overhaul its product quality, design and performance, the South Korean company took just 10 years to establish solid market share in the US.

Bangkok 61st most expensive city to live in