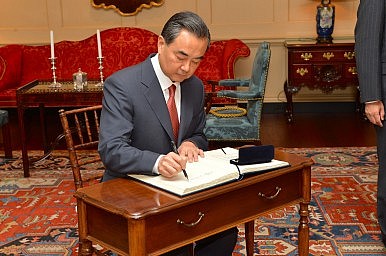 FTAAP would mesh with China’s strategy of promoting regional integration – and would provide an alternative to the U.S.-led Trans-Pacific Partnership (TPP) talks, which currently excludes China.

Foreign Minister Wang Yi made his remarks at the Lanting Forum, which was billed by China’s Foreign Ministry as “a preview of the theme, agenda, and outcomes of the 22th APEC Economics Leaders’ Meeting.” According to Xinhua, Wang said that this November’s APEC summit will see progress on an Asia-Pacific Free Trade Area.

Wang hopes that APEC members will send a “clear message” on regional economic integration by advancing the FTAAP.

According to China’s vision, this massive FTA would effectively overrule the piecemeal free trade agreements that currently exist (or are under negotiation) among Asia-Pacific economies.

The FTAAP “will help to integrate regional bilateral and multilateral cooperation mechanisms and reduce the risk of overlap and fragmentation,” Xinhua paraphrased Wang as saying. Back in May, when a Chinese Ministry of Commerce official urged “quick action” on an Asia-Pacific FTA, he argued that this larger FTA “will solve the problems caused by barriers between different FTAs, such as distinct rules and requirements.”

via China’s Push for an Asia-Pacific Free Trade Agreement | The Diplomat.

China to Invest More in ASEAN ahead of AEC in 2015