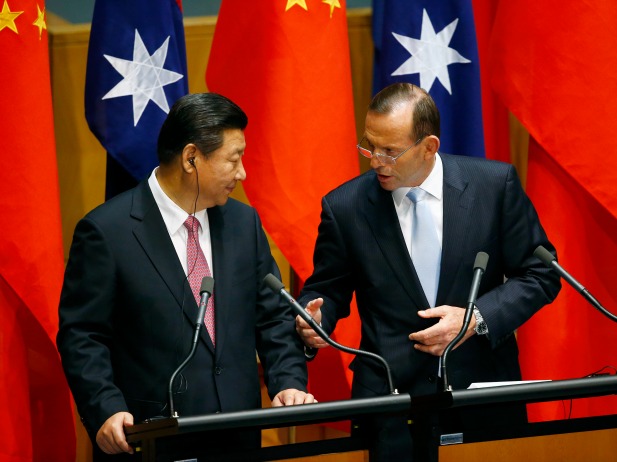 The Hunger Games proves too threatening in China and Thailand. The release of the third installment of the franchise, “The Hunger Games: Mockingjay Part 1,” in China was postponed until January, reportedly to balance the 2014 foreign and domestic box office receipt totals. Some commentators have suggested that the move is more political, as the film depicts a dystopian world in which a revolutionary movement attempts to overthrow an authoritarian government.

In Thailand, the connection between the film and revolution is much more overt—several student protesters have been detained for using a three-finger salute, a symbol of resistance in the movie. The students, in Thailand’s northeast, were protesting the May 22 military coup that removed the populist Prime Minister Thaksin Shinawatra from power.

New economic data released Monday morning showed that Japan had lapsed into recession, striking yet another serious blow to Prime Minister Shinzo Abe’s vaunted economic recovery policy and leading some to ask if this is the end of Abenomics. In a bid to win popular mandate for his economic policies, Abe announced he would delay a planned increase to the national sales tax and dissolve the lower house of Japan’s parliament. On Friday afternoon, lawmakers in the house of representatives chanted “Banzai!” as they disbanded. Snap elections are expected to take place in mid-December, and while Abe’s ruling Liberal Democratic Party may lose a number of seats, they are overwhelmingly expected to maintain their majority and could potentially increase their power.

2.  In Hong Kong, confrontations lead to questions over the future of protests.

Dozens of demonstrators, apparently frustrated with the nonviolent strategy that has guided the Hong Kong pro-democracy protests, used metal barricades to smash doors and windows of Hong Kong’s legislature in an attempt to break in. The police arrested six people for assault of police officers and criminal damage to property, and the leaders of pro-democracy and student groups joined the government in criticizing the violent demonstrators.

The incident came hours after the city of Hong Kong cleared out a smaller protest camp with no resistance; thirty court bailiffs enforced an injunction against street barricades at the request of the landlords of neighboring buildings in the area called Admiralty, and a similar injunction was issued for the protest site in Mong Kok.

The 2014 Group of Twenty (G20) summit, the ninth such meeting for the G20 heads of government, was held in Brisbane last weekend. The world leaders laid out a plan comprised a plan of more than 800 measures to boost the global economy by more than $2 trillion. Climate change was also discussed at the meeting, despite Australian Prime Minister Tony Abbott’s resistance to its inclusion in the G20 summit agenda. Also of note, the heads of several member states, including the United States and Canada, threatened further sanctions against Russia if Moscow does not withdraw its troops from Ukraine.

A critical component of President Thein Sein’s vision of reform, the peace talks between minority groups in Myanmar and the government, have been burdened by the Myanmar army’s shelling of a rebel group’s training facilities in Kachin state near the Chinese border. At least twenty-three rebels from the Kachin Independence Army (KIA) were killed in the incident, casting doubt on the Myanmar military’s resolve for peace talks. The incident marks the deadliest attack since a ceasefire agreement broke down in 2011. The Myanmar army has claimed that the strike was only meant as a warning, but KIA has denied this assertion.