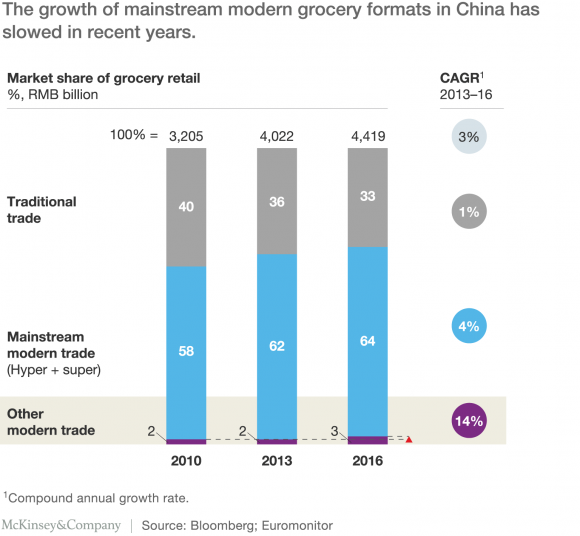 Growth among CPG companies slowed to below five percent in 2016, down from 15 percent in 2011. It’s a complex and fast-changing market that increasingly requires CPG companies to develop top-notch sales capabilities. Indeed, a recent survey indicates that CPG executives see key-account management (KAM) as the most critical capability for driving growth in China.1

With mainstream modern retailers struggling, CPG companies have been turning their attention to higher-growth channels.

Much of the growth in offline retail in China today is coming from newer modern-retail formats—in particular, convenience stores, which grew by 14 percent per year between 2013 and 2016.

And the market is far from saturated: using Japan’s five largest cities as a benchmark for number of stores per thousand people, the number of convenience stores in China’s top ten cities could almost triple.

Companies must tailor their key-account-management model and capabilities to the Chinese context.

Another factor making growth more elusive for CPG companies is that consumption growth has become more geographically dispersed. Slowing demand in Tier 1 and 2 cities has forced national retailers including Carrefour and Walmart to shutter some stores in those cities and instead seek growth by opening stores in lower-tier cities, where they’re increasingly finding themselves in direct competition with regional players. The regional retailers, for their part, are dominating the grocery market and expanding into neighboring provinces.

This fragmentation within modern trade—large national accounts competing with many important regional accounts—makes KAM in China much more complex and resource-intensive than in developed markets. Whereas CPG companies in the United States might devote disproportionate resources and attention to about 25 key accounts, in China that number can be closer to 50.

KAM in China, however, is a relatively new concept, and many CPG companies operating in the Chinese market are currently at a low level with regard to sales skills and technologies. And in a context where the balance of power between manufacturers and retailers is just about even, KAM dynamics and considerations are very different from those in Europe or North America. What will it take for a CPG sales organization to excel in China? In this article, we examine three trends shaping China’s consumer sector and their implications for key-account management.

Would you like to learn more about our Consumer Packaged Goods…