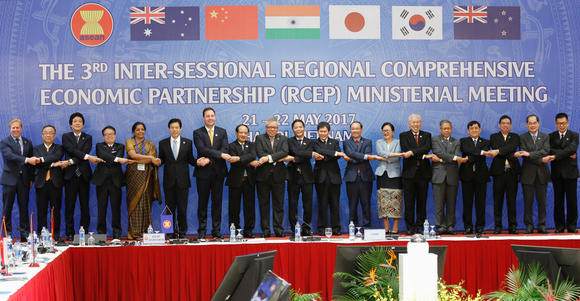 Chief negotiators from the 16 countries in the Regional Comprehensive Economic Partnership will meet Friday in Indonesia with an eye toward accelerating progress on the proposed trade pact in response to last month’s deal on the 11-member Trans-Pacific Partnership.

The talks in Yogyakarta on the island of Java, scheduled to run until Feb. 9, will cover such issues as the list of items on which to reduce or eliminate tariffs, protections for foreign companies’ investments and free movement of labor.

The RCEP consists of China, Japan, South Korea, India, Australia, New Zealand and the 10 members of the Association of Southeast Asian Nations. It would create a free trade area covering roughly half the world’s population and some 30% of its gross domestic product and total trade.

Negotiations on the deal began in 2013, but disagreements on how far it should go have yet to be settled.

Member countries that also participate in the TPP, such as Japan and Australia, favor more ambitious steps to lower tariffs and other trade barriers, while China and other nations remain wary of greater liberalization.