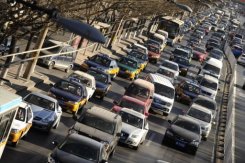 China’s auto sales surged past those in the United States in 2009 to make the Asian nation the world’s biggest car market, industry data showed Monday, but analysts warned sales would slow this year.The China Association of Automobile Manufacturers said more than 13.64 million units were sold last year, marking an increase of 46.15 percent from the 9.4 million units sold in 2008, Xinhua news agency reported.

In the US, auto sales fell 21.2 percent to 10.43 million vehicles in 2009, according to Autodata figures released last week.

Analysts welcomed the news, but warned that China car sales could hit the brakes this year.

“We are still optimistic about the outlook for this year but it will be quite difficult to achieve the growth rates of 2009,” John Zeng, a Shanghai-based analyst at IHS Global Insight, told AFP.

Related Topics:auto sales
Up Next