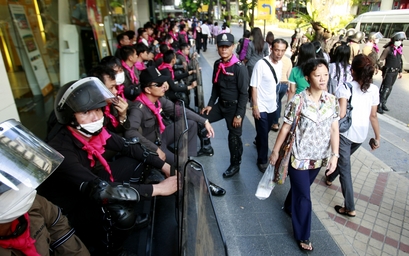 Political violence is raising growing worries for the business sector, as the disruptions from the unrest take a growing toll on operations.

Pornsil Patcharintanakul, deputy secretary-general of the Thai Chamber of Commerce, said with protests and violence expanding into other provinces, the private sector is gravely concerned that trade and investment in Thailand will suffer over the next several months.

“We have a failed government if it fails to keep violence under control,” he said. “Economic losses will be massive – more than 210 billion baht has been lost so far in an estimation by the chamber, and if violence gets out of control and spreads to other provinces, losses would be much higher.”

“We didn’t expect such a long period of confusion. Japanese companies are suffering a lot from the ongoing situation,” said Fukujiro Yamabe, vice-president of the Japanese Chamber of Commerce (JCC) in Bangkok.

“Some of our members face staff shortages because their workers cannot make it to the office. Some face a lack of funding as well,” he said.

Many companies have moved to temporary offices and factories, some outside of Bangkok, due to the violence. Closures of the Skytrain and subway are also causing problems for staff.

Some JCC members are reportedly considering moving their operations outside Thailand. Mr Yamabe predicts this episode may cause some companies to at least consider shrinking their Thai operations and cutting investment.

Airport Authority of Thailand (AoT) to help airlines and entrepreneurs