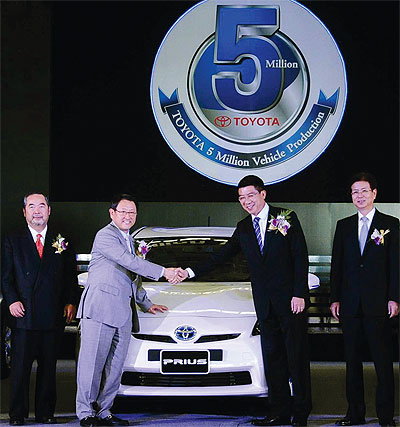 Toyota started its business in Thailand in 1962 and began making cars in 1964. Over 48 years, the manufacturing network has expanded to include sites in Samrong and the Gateway and Ban Pho plants in Chachoengsao.

One of the automaker’s three Thai assembly plants, the Ban Pho facility, will see its annual output capacity of roughly 120,000 units rise to around 200,000.

The Ban Pho plant is southeast of Bangkok and makes the Hilux Vigo pickup truck and the Fortuner sport utility vehicle, both part of a series of strategic vehicles bound for emerging markets. In addition to Southeast Asia, demand from the Middle East and other export destinations is expected to grow steadily down the road.

Toyota made its most significant move in Thailand in 2004 when it invested 37 billion baht in a pickup truck and passenger car hybrid called IMV or innovative international multi-purpose vehicle project.

New-car sales in six major Southeast Asian markets, including Thailand and Indonesia, totaled 1.8 million units for the first nine months of 2010. This was up 36% from 2009, with full-year sales forecast to top the 2008 record of 2.09 million units. With a share of 40% in these six markets, Toyota is in the top position. The Asian market outside Japan and China is becoming a core earner for the automaker, with operating profit there swelling 2.5-fold on the year to 164.2 billion yen for the April-September half.

Recently, Camry Hybrid has been introduced to Thailand and Asia for the first time and apparently succeeding which will achieve more than 10,000 sales units within this October of this year. Now, Toyota Motor Thailand is ready to introduce another hybrid car to Thai customers which is Prius. Thailand will become the third country in the world that will serve as the manufacturing base of Prius, in this November