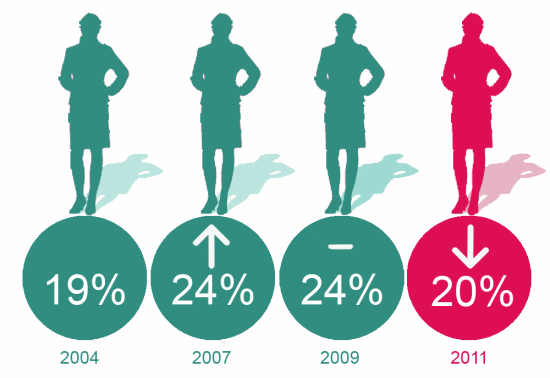 We do not often think of Thailand as a top country for feminism and equality between men and women. Yet if that means having the same career opportunities and paycheck than men, this may well be the case. Research from the 2011 Grant Thornton International Business Report (IBR) reveals that women currently hold 20% of senior management positions globally, down from 24% in 2009, and up just 1% from 2004.

In its quarterlysurvey of privately held businesses (PHBs) Grant Thornton also found that the percentage of PHBs that have no women in their senior management has risen to 38% compared to 35% in 2009.

Thailand boasts the greatest percentage of women in senior management

Across the world, Thailand boasts the greatest percentage of women in senior management (45%), followed by Georgia (40%), Russia (36%), Hong Kong and the Philippines (both 35%). The countries with the lowest percentages are India, the United Arab Emirates and Japan where fewer than 10% of senior management positions are held by women.

“Thailand’s working culture provides equal opportunity to both men and women to reach senior management levels. Companies committed to diversifying their leadership mostly ensure that women have equal shots at ‘stretch’ assignments such as serving on company-wide task forces, being part of a start-up or turnaround operations, and gaining international experience.

Top women emphasize their love oftheir jobs, and the hard work it took to get there. They ask for the challenging assignment. They are totally committed.”

The data revealed that G7 countries lag behind the global average with only 16% of women holding senior roles whilst, regionally, Asia Pacific (excl. Japan) scores highest with 27%. Women have become most successful in increasing their share of senior management roles in Thailand, Hong Kong, Greece, Belgium and Botswana, where the percentage of women in these roles has risen by at least 7% since 2009.

“Being single or getting married late could be causes for Thai women being able to climb up corporate ladders. They are more likely to put in extra hours at work. Moreover, for married ones, they own the ability to balance work with their personal lives,with support from extended family to take care of their children.

Women currently hold 20% of senior management positions globally, down from 24% in 2009, and up just 1% from 2004. But in Thailand this percentage is up to 45%, highest in the world says Grant Thornton International Business Report

Employers also play supporting role by including work-life programs in organizations such as maternity and childbirth leave, flexible work schedules, job-sharing, part-time work, compressed workweeks, and reduced duties, all of which offer women the flexibility to manage home-work conflicts as best suits them, while maintaining productivity levels. In some cases, guarantees are offered to individuals to safeguard their position or level of seniority and the continuation of their health and other benefits. In addition, companies often offer programs such as satellite workplace, which utilize new technologies to enable employees to work from home for at least some part of their working week.”

However the story is different in Asian economies, Thailand leads the way with 30% of companies employing female CEOs, followed bymainland China (19%), Taiwan (18%) and Vietnam (16%).- ends -Notes to editorsThe Grant Thornton International Business Report (IBR) provides insight into the viewsand expectations of over 11,000 businesses per year across 39 economies.

This unique survey draws upon 19 years of trend data for most European participants and nine years for many non-European economies.

The women in business data consists of responses gathered in Q4 2010 and Q1 2011, resulting a global sample of over 9,000 respondents. Sample IBR is a survey of medium to large privately held businesses, researching the opinions ofover 11,000 businesses annually. The target respondents are chief executive officers,managing directors, chairmen or other senior executives (title dependent on what is mostappropriate for the individual country) from 39 economies primarily across five industries.

Just how much do women across Asia/Pacific know about managing finances? MasterCard Worldwide’s inaugural Index of Financial Literacy released today highlights that women across Asia/Pacific are financially savvy to some extent, in particular among the over-30, married, working group, but that the level of financial literacy in women can be raised further, especially among the younger generation.

Thai women topped the Financial Literacy Index with an Index score of 73.9. They had the highest scores in Financial Planning (87.0) and Investments (69.3), outshining their peers in the other 13 Asia/Pacific markets surveyed. Also noteworthy was Vietnamese women, who took fourth place, with an overall Index score of 70.1.

In contrast, developed markets Korea (55.9) and Japan (59.9) makes up the lower spectrum of the Index.

The MasterCard Index of Financial Literacy is based on a survey of consumers from 24 markets1 across Asia/Pacific Middle East Africa (APMEA). It comprises three major components: Basic Money Management, which examines the respondents’ skills in terms of budgeting, savings and responsibility of credit usage; Financial Planning, which assesses their knowledge of financial products, services, concepts and ability to make long-term plans for financial needs; and Investment, which indicates their basic understanding of the various investment risks, different investment products and if they have the necessary skills.

The Index score is calculated from the weighted sum of the three components, with 100 as the maximum score in financial literacy and zero as the lowest possible score. The survey was conducted between 13 September and 11 November 2010 and will continue to be conducted on an annual basis.

Of the three components that make up the survey, women across Asia/Pacific as a whole scored the best in Financial Planning 74.6), followed by Basic Money Management (63.9) and Investment (56.7).

Among the developed markets, New Zealand and Australia had the second (71.3) and third (70.2) highest overall Index scores. They also led in Basic Money Management with scores of 76.7 and 75.8 respectively. They did not perform as strongly in Financial Planning, coming in under the 12 market average, and Investment (58.3 and 55.2 respectively).

Singapore in fifth place did relatively well in terms of basic money management (70.0) as well as financial planning (80.4). However, Singaporean women were outshined by their counterparts from the other markets surveyed in terms of investment skills and knowledge, as indicated by their score of 51.5 which is below the regional average.
The developing markets of the Philippines (68.2), Indonesia (66.5) and Malaysia (66.0), were also in the Index top 10, outperforming their counterparts in India, China, Japan and Korea.

The most populous developing markets in the world, India (61.4) and China (60.1) reflected a lower Financial Literacy score among women. Chinese and Indian women are particularly weak in Basic Money Management (54.4 and 58.8), near the bottom of the ranking for that component in Asia/Pacific. While, Japan and Korea are the only two markets in Asia/Pacific with Women’s Financial Literacy Index score that falls below 60.

Ikea completes roofing part of its first store in Thailand

Thai Airways to buy 75 aircraft in next decade