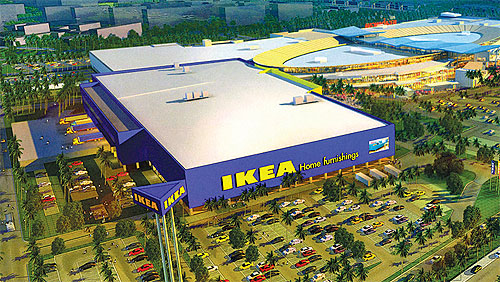 The first Ikea store in Thailand and the biggest in Southeast Asia will celebrate its roof capping today from 6:30-9:30pm with a traditional Swedish party under the theme of “Wholeheartedly Warm”. The event will mark the finish of the store’s main building and the beginning of the next step towards interior design and merchandise planning to get the world-famous Swedish home furnishings mega store alive and kicking by the end of the year.

“Ikea Bangna will be ready to provide customers with the ultimate Ikea experience on November 3,” said Tom Huzell, managing director of Ikano (Thailand) Ltd, the Ikea franchisee that holds licences for Singapore, Malaysia and Thailand.

The highlight of the event will be the screening of a mockumentary made by Chulalongkorn University students that features the transformation of derelict street scenes into comfortable atmospheric spaces. There will also be an exhibition area showcasing the Ikea business model: To offer a wide range of well-designed and functional home furnishing products at low prices so as many people as possible can afford them.

via Bangkok Post : Ikea plans a very warm welcome for its first store in Thailand.

Ikea, plans to invest another Bt6 billion in Thailand to open its second and third stores in western and northern Bangkok in the near future.

Both new stores, which will be opened within the next five years, are anticipated to be similar in size to the first Bangkok Ikea in Bang Na, which will have 43,000 square metres of total retail space when it opens late this year.

The move is in line with the company’s ambition to become the No 1 homefurnishing company in Thailand.

The company yesterday announced its would open Ikea Bangna in November.

The store, with about 1,300 free parking spaces, will be the largest Ikea outlet in Southeast Asia. It will employ about 400 people and reflect the same unique architectural design for which Ikea stores are known worldwide.

In addition to Thailand, Ikea plans to open its second store in Kuala Lumpur within the next two years, while the third store will be opened at Johor Bahru, Malaysia’s secondlargest city, within the next three to four years.

Tom Huzell, managing director of Ikano Retail Asia, the Ikea franchisee holding licences for Ikea in Singapore, Malaysia and Thailand, said the company expected to open its second Ikea store in Bangkok within the next three years. Meanwhile, the first store is anticipated to reach annual visitor traffic of 6 million people within the same threeyear period.