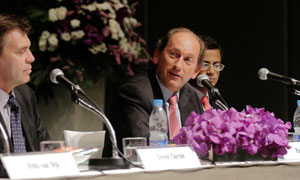 Nestlé will invest more than CHF 98 million THB 3.5 billion in Thailand to increase manufacturing of its products including coffee and ice cream.

The two year investment will support the expansion of the Company’s existing factories in Thailand, as well as the construction of a new Nestlé Quality Assurance Centre.

At a press conference in Bangkok, Mr Bulcke (centre) also explained how Thai coffee farmers will benefit from the Nescafé Plan.

The plans aim to meet the growing demand for Nestlé products in the country and the surrounding region.Paul Bulcke, Chief Executive Officer for Nestlé, made the announcement during a visit to the Thai capital Bangkok this weekend.He said: “The sophistication of Thai consumers, and their increasing focus on higher quality products with greater health and nutritional benefits, is giving Nestlé an increasing competitive advantage in Thailand.

He said: “The sophistication of Thai consumers, and their increasing focus on higher quality products with greater health and nutritional benefits, is giving Nestlé an increasing competitive advantage in Thailand.

“Thailand has a very important role to play in both our Asian and our global strategy, as the country also looks after Nestlé’s business in the region.

“We are committed to Thailand for the long-term. We have confidence in the future of the Thai economy and are optimistic about the considerable potential of the Thai market and the Indochina Region.”

In 2010, Nestlé’s business in Thailand grew by more than 10% through a combination of domestic sales and the export of Thai-produced products to more than 44 countries around the world.

Thailand is also one of the countries to benefit from the Nescafé Plan, the CHF 500 million initiative launched by Nestlé last year to address responsible farming, sourcing and consumption across its coffee supply chain.

As part of the plan, Nestlé has committed to purchasing coffee directly from more 12,500 farmers in Thailand’s main coffee growing areas within the next five years.

This will help local coffee growers obtain more favourable prices for their crops, while enabling them to gain access to financial and technical assistance.

Nestlé will also increase its distribution of coffee plantlets to Thai farmers to around six million plantlets within five years.

This will not only benefit farmers, but will also help the Company by giving it access to a higher quality, more reliable supply of coffee.

In 2009, Nestlé announced major investments in two significant manufacturing projects in Thailand, taking its overall capital investment in the country at that time to CHF 56 million.

The investments supported the construction of a new Nestlé Purina pet food factory at the Amata City Industrial Estate, and the expansion of the Company’s existing factory in Navanakorn, which produces milk and coffee products.