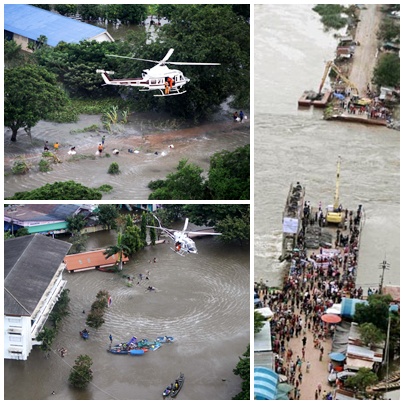 Zurich Financial Services Group (Zurich) announced that based on preliminary estimates it expects the impact of the floods in Thailand, the increased cost of the earthquakes in New Zealand, and the further benefits of recoveries from its global aggregate catastrophe reinsurance cover in total, for the fourth quarter 2011, to range between USD 200 – 250 million. A specific estimate will be included in the Annual Results 2011 which are due to be released on February 16, 2012.

Thailand experienced the strongest monsoon rainfalls for decades starting in July 2011 and lasting for several months. The heavy rainfalls caused floods in northern and central Thailand reaching their peaks in October and early November 2011 and affecting both major residential and industrial areas.

Based upon preliminary estimates, Zurich expects losses related to these floods to be between USD 250 – 300 million.

The Christchurch region in New Zealand was hit by a major earthquake in February 2011 followed by several aftershocks in the course of the year. Initial losses were recorded in the first and second quarters 2011. In anticipation of more restrictive requirements and new building codes which may impact reconstruction costs, along with further quakes and aftershocks, there has been an USD 80 million increase in the estimated cost of these events.

Given the exceptional frequency and overall severity of catastrophes and significant weather related loss-events throughout 2011, including the events mentioned above, cumulative losses have triggered the Group’s global aggregate catastrophe reinsurance cover with additional recoveries of USD 130 million.

While these amounts represent Zurich’s current best estimate of the cost for the above events, the nature of many of the losses and the extended remediation period to complete repairs means that uncertainty as to the final cost remains.

via Zurich assesses impact of floods in Thailand and revises estimate of earthquakes in New Zealand.

Honda to resume production in Thailand in March