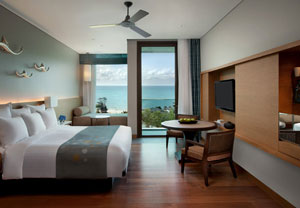 Marriott International will open three new properties in Thailand this year, further strengthening its position in the country with 16 hotels in its Thai portfolio.

The Rayong Marriott Resort & Spa, The Bangkok Marriott Hotel Sukhumvit and the Marriott Executive Apartments Bangkok – Sukhumvit Thonglor will all open in 2012, adding to an already extensive portfolio of hotels and brands.

Chief operating officer, Marriott International, Asia Craig Smith said the company is delighted to be expanding its footprint in Thailand with these three new. “We have had a long relationship with Thailand having opened our first hotel here, the JW Marriott Bangkok, some 15 years ago,” Mr Smith said.“It is great to be able to bring these new hotels to Thailand, which we feel will have a very positive impact on both domestic and international travellers to the country.”Mr Smith confirmed that Marriott International’s commitment to Thailand is for the long term and in addition to these three hotels, a further five hotels are set to open in the next three to four years.

via Marriott makes it 16 in Thailand – Hospitality News – etravelblackboardasia.com.

Thai Airways back to profit