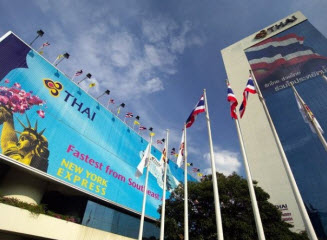 Thai Airways International THAI set a target of 10% revenue increase per year over the next three years 2013-2015 with a new fleet in service later this year, according to the airline’s Executive Vice President for Strategy and Business Development Department Chokchai Panyayong.

Mr Chokchai currently serves as Acting President of THAI.Speaking after a Board of Directors’ meeting, Mr Chokchai said THAI aims to earn Bt200 billion in revenue this year, with an annual average of 75% in passenger load factor.

Operating results for the first half of this year revealed revenue to be 3% below target due to impact from the floods last year.However, the Board believes that earnings will pick up based on the projected strength of third and fourth quarters of the year, thanks to increased passenger loads and lower fuel cost as a result of the company’s fuel management policy.

Revenue and profit were robust in June and July this year. In July 2012 for instance, passengers’ cabin factor increased to 79.8%, compared to 77.2% in July 2011. This would make THAI strong enough to expand its flight route to Abu Dhabi later this year.

Is Ethnicity a Barrier to Growth in Asia?