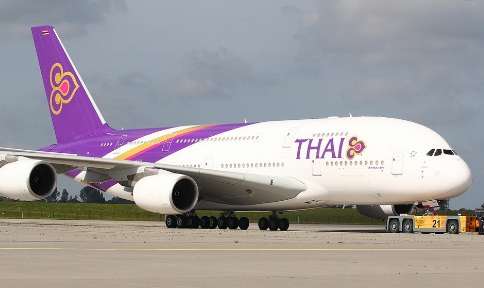 The first of Thai Airways International ’s six Airbus A380-800 jetliners has been delivered to the national flag carrier this morning from the Airbus assembly plant in Toulouse, France, according to Chokchai Panyayong, THAI Executive Vice President for Strategy and Business Development Department.

A welcoming ceremony for the first aircraft was held at Suvarnabhumi airport. THAI has become the ninth airline to receive what is billed as the world’s largest and most eco-efficient aircraft.

Mr Chokchai, who is also Acting THAI President, said the aircraft named “Sri Rattana” by HM the King was one of six Airbus A380-800 aircraft that THAI has purchased to replace six aging Boeing 747 aircraft which would later be decommissioned.

He said THAI expected that when all six Airbus A380-800 aircraft were in operation, the company’s revenue would increase by 10 per cent to Bt220 billion.

THAI will place the aircraft into service on October 6 for the Bangkok-Hong Kong and Bangkok-Singapore routes.

After the second Airbus A380-800 aircraft is delivered in November, the two aircraft would be on service for Bangkok-Frankfurt and Bangkok-Hong Kong routes from mid December.

via First Airbus A380-800 aircraft delivered to THAI.

Toyota to double engine capacity in Thailand by 2015

Rules for Creating Value in the Social Era