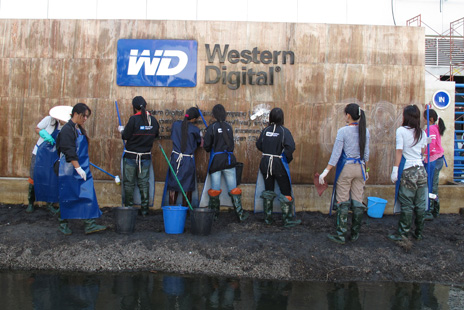 Thailand is a tropical country with annual monsoons, but nearly 2 meters of water was well beyond most factories’ flood prevention plans. When the rain started, Western Digital organized teams of factory workers to fill and stack sandbags around the perimeter of the plant.

But it soon became clear that these would be no match for what has been described as a once-in-a-century event.

“We were pumping water, and when the amount coming in was more than we could pump out, that’s when we knew we were doomed,”

Thailand assembles about 40 percent of the world’s hard drives

and if you account for drive component manufacturing, it’s the global leader, according to Fang Zhang, a storage analyst at market research firm IHS iSuppli.

Seagate was the first company to bring some of its hard drive manufacturing to the country, in 1983, and as it built up a local network of specialized part suppliers and workers, others soon followed.

It’s now such an important industry to the country that multiple Thai universities offer curricula designed by hard drive manufacturers to replenish their engineering workforces.

This clustering of a highly specialized industry has become common in the global trend toward lean supply chains and just-in-time manufacturing. Companies can save costs by minimizing the components they store in inventory and minimizing their distance to suppliers.

“We encouraged suppliers to be nearby so that cycle time was shorter and there was less inventory,”

says Bunya. For example, Donaldson, a filter company, employs hundreds of workers at a nearby plant that produces only the tiny air filters that collect loose material inside drive enclosures. That facility, along with many others, also went underwater.

via The Lessons of Thailand’s Flood – IEEE Spectrum.