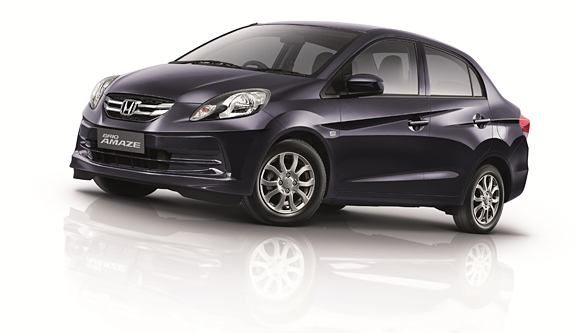 Honda put tremendous effort into ensuring the Brio Amaze was launched in response to the Thai first-car market demand before the end of the government’s first-car buyer program.

Based upon the original Brio model, the Brio Amaze represents a major milestone resulting from a collaborative effort by Japanese and Thai engineers at the Asia Pacific Honda Research & Development Center located right here in Thailand to satisfy the customer needs in Thailand and Asia. Honda put tremendous effort into ensuring the Brio Amaze was launched in response to the Thai first-car market demand before the end of the government’s first-car buyer program.

The new Brio Amaze is the perfect choice for Thai customers who are looking for a first car that is distinctive and available at a very affordable price,” said Pitak.

The design of the new Brio Amaze is based on the Smart Micro Limousine concept. It is also influenced by Honda’s Man Maximum Machine Minimum approach that puts the highest importance on the driver and passengers. The exterior styling is sleek with distinctive character lines from front to rear, enhanced by a sporty chrome grille and bumpers in the same color as the body. The newly-designed tail lamps are complemented by chrome accents for a sleeker look.

The spacious interior of the all-new Brio Amaze provides a large rear luggage storage compartment ready for any journey. Powered by a 1.2 liter, 4-cylinder, 16-valve, 90-horsepower SOHC i-VTEC engine, the new Brio Amaze offers fun driving and unrivaled fuel economy with fuel consumption of 20 kilometers per liter. It is a genuine eco sedan that is friendly to the environment in accordance with the Euro 4 standard.

A rack & pinion and electric power steering (EPS) system gives the new Brio Amaze great maneuverability with a small turning radius of only 4.6 meters. Comprehensive safety features include a G-CON steel safety body structure; Anti-lock Braking System (ABS); Electronic Brake Distribution (EBD); and an intelligent i-SRS for the driver and a SRS airbag system for the passenger that confirms to UNECE standards to provide protection from side and front impact (in all variants). Other key features include a remote key; 2 DIN audio system; USB connector; AUX for peripherals; and rear armrests with nine cup holders. (Standard equipment differs for each variant.)

The Brio Amaze is the ideal solution for a new equation of happiness delivered by Honda. It represents the harmony of contrasting values that are agility but with spaciousness and comfort; fun driving but with fuel-saving performance; and a distinctive eco car model that is equipped with a full range of safety features.

To boost the outstanding image of the new Brio Amaze, Honda has selected Bie Sukrit Wisetkaew, a superstar among Thai audiences of every age and gender, as the presenter for the new model. He will deliver the new equation of happiness to all customers though an exclusive song called “The Equation of Love” that was specially produced for the Brio Amaze. A highly-acclaimed vocalist and actor, Bie is agile and modern as well as fun and easy-going, but with great determination to work efficiently and achieve the best outcome. His unique qualities truly reflect the personality of the new Brio Amaze.

Customers under the first car program who reserve a new Brio Amaze by the end of the year are eligible to receive a tax rebate of 65,000 to 73,000 baht.

To welcome the launch of all-new Brio Amaze, Honda kicked off the stunning Brio Amaze Equation of Happiness campaign for customers who place their orders from today until December 31, 2012. The campaign offers three tiers of surprises, including: