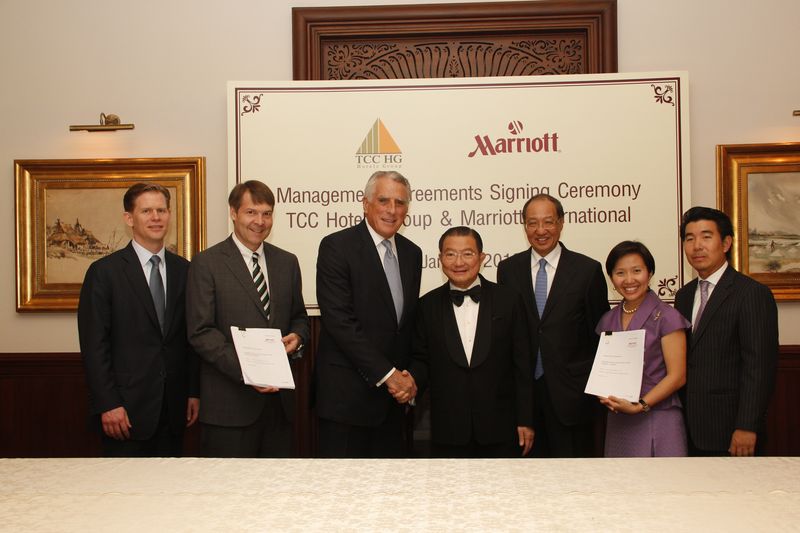 The seven hotels are:

Marriott International expects to add 3,000 rooms to its existing portfolio of hotels in the country from 2016.

“We are delighted to announce this landmark deal for Thailand. TCC Hotels Group is very well established as a hotel owner and operator around the world and these seven hotels will add to our already strong portfolio of hotels in the country.”

“I believe this partnership shows our commitment to and faith in Thailand as a strategically important business and leisure destination in South East Asia. Managing this portfolio of TCC hotels in the country will allow us to extend our product offering and brands in Thailand, and enable domestic and international travellers to experience our hotels and world-class service.”

TCC Hotels Group expects to invest approximately US$500 million for the seven hotels including an extensive refurbishment of the existing Imperial Queen’s Park Hotel, Bangkok and the Imperial Adamas Phuket Beach Resort before being rebranded and opened under the Marriott Hotels & Resorts brand in 2016.

“TCC Hotels Group believes that Thailand and the group could benefit from the global network and standards of Marriott International. We are very excited to be working together with Marriott International, an experienced global operator to support our growth strategy and our confidence in both Tourism and MICE business sectors of Thailand,”

said Wallapa Traisorat, President of TCC Hotels Group. These 3,000 rooms are in addition to Marriott International’s existing pipeline in Thailand of more than 1,000 rooms, and the company expects to be managing almost 7,000 rooms in Thailand by 2017 to support the continued tourism growth for Thailand as it becomes a strategic location of the Asian Economic Community AEC.