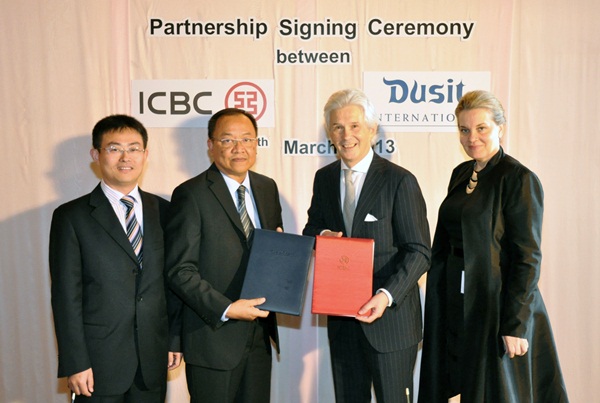 Special discounts and complimentary extras are offered to ICBC cardholders, the latest in a series of efforts undertaken by Dusit International to cater to increasing demand from the Chinese market.

Dusit International signed a promotional partnership with the Industrial and Commercial Bank of China (ICBC Thai), a member of ICBC the world’s largest commercial bank.

ICBC is the biggest bank in China, with reported assets of 17.5 trillion RMB, or 2.9 trillion USD.  The company has issued a reported 77 million credit cards, making it the most issued credit card in Asia and the 4th most issued card in the world.

“We are pleased to add another service to our growing list of amenities catering to the Chinese traveler, along with the world’s largest bank, ICBC,” states Mr. David Shackleton, COO of Dusit International. “We consider the emerging Chinese market one of our most promising, and are happy to offer this limited time promotion to help introduce new guests to Dusit International Hotels and Resorts.”

Mr. Chaiwat Tanchewawong, Executive Vice President of ICBC [Thai], notes “All Cardholders of the ICBC Group, including ICBC China, ICBC Thai and ICBC Overseas, will benefit from the privileges offered by Dusit International at their 14 participating hotels & resorts. This partnership will bring mutual success as ICBC cardholders will enjoy a special discount, while the hotel will have an increase in guests that are ICBC cardholders.”

The 14 Dusit International hotels and resorts participating in this promotion include: