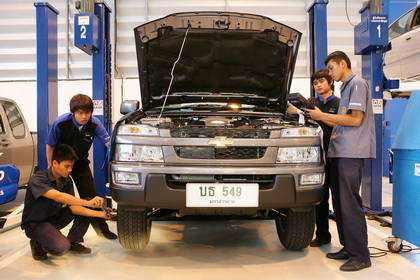 Finance Minister Korn Chatikavanij has promised both local and international investors that local banks have adequate liquidity to support their industries.

“Liquidity is high and we expect bank lending to expand at 10 per cent this year, which should be adequate,”

Korn said yesterday on the sidelines of a loan-contract signing between three local banks – Bangkok Bank, Siam Commercial and Tisco – on the one side and US-based car-maker General Motors on the other. Three banks have agreed to lend General Motors (Thailand) Bt13.5 billion to finance two vehicle programs and construction of a new diesel-engine plant in Rayong province.

Korn was replying to a question about whether Thai banks had adequate funds to finance other foreign investors.

Korn also praised the GM brand and its reputation.

he said, referring to the government stimulus package known as Thai Khemkhaeng, through which the government plans to invest up to Bt1.43 trillion over three years.

View original article here:
What’s Good for GM Is Good For Us: Korn

The loan term is seven years.

BBL president Chartsiri Sophonpanich said GM’s investment in Thailand was part of that company’s long-term international plan, because Thailand was an important production base for the industry. The move reflects Thailand’s strong competitiveness.

Vorapak Tanyawong, senior executive vice president for corporate banking at SCB, said the lending deal was completely ordinary and no different from other loans, so the three banks did not require any special collateral or conditions. Besides, GM’s major shareholder is the United States government, with a 61-per-cent stake.

“This kind of deal, with Thai banks lending to a foreign company, could occur again this year. Large loan amounts would require a syndicated loan, but for smaller amounts a single lender would do,” he said.

Steve Carlisle, president of GM Southeast Asia Operations and Chevrolet Sales (Thailand), said the funds from the three banks would be used for two important vehicle programmes at the company’s production base in Rayong province.

The programmes are designed to produce next-generation pickups and sport utility vehicles. These are significant products for Thailand, a country in which pickups remain the preferred means of four-wheel transportation.

The new products will strengthen Chevrolet’s line-up in Thailand and open up exciting new export opportunities to Asean markets and around the world.

The funds will also be used to build a new diesel-engine plant next to GM’s vehicle-assembly plant in Rayong province. With annual capacity of 106,000 units, these engines will power a range of vehicles built and sold in Thailand and elsewhere.

What’s Good for GM Is Good For Us: Korn

Related Topics:General Motors
Up Next