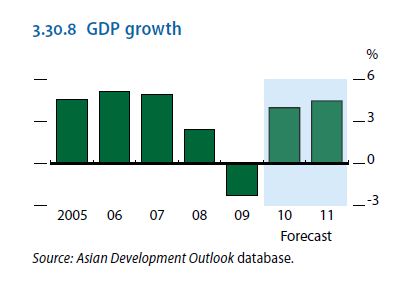 The Bank of Thailand (BoT) its revised Gross Domestic Product (GDP) forecast to 6.5-7.5 per cent in 2010 from the 4.3-5.8 per cent growth it projected earlier, Assistant Governor Paiboon Kittisrikangwan said.

The Thai economy in the first quarter grew by 12 per cent and is expected to grow more than seven per cent in the second quarter.

Economic growth contributed to a ten per cent expansion of GDP in the first quarter.

The recovery of the global economy has resulted in the continuing expansion of Thai exports. Impacts from the domestic political turmoil are limited and tourism shows signs of recovery.

The 2011 GDP forecast is maintained at 3-5 per cent based on steady economic growth.

Mr Paiboon said that the growth of 2010 exports was projected at 24.5-27.5 per cent as the global economic problem and the European debt crisis are not likely to paralyse the global economy.

The economies of Thailand’s trade partner countries, particularly in Asia, have improved.

Core inflation has dropped thanks to the extension of the government’s measures to help low income earners until the year end and fixing sales prices for entrepreneurs until the third quarter.

via Bank of Thailand adjusts GDP growth projection to 6.5-7.5%.

With robust social safety nets, Thai workers would be more inclined to work in more productive but higher volatility jobs in manufacturing production rather than lower productivity, low risk jobs in agriculture or the informal service sector (which currently function as safety net for subcontracted or temporary workers).

Likewise, higher incomes and lower savings are needed to trigger more consumption in Thailand. A large share of loans in 2008 was for working capital as the cost of raw materials and fuel increased significantly in the first half of the year. Large corporations will increasingly turn to domestic borrowing as the cost of off-shore borrowing increases rapidly. Bank loans to large corporations will therefore to continue to expand, as their credit quality is generally high, but those to small and medium enterprises (SMEs) may not.

Expansionary monetary has been employed in Thailand to help to mitigate the impact of the global financial crisis.