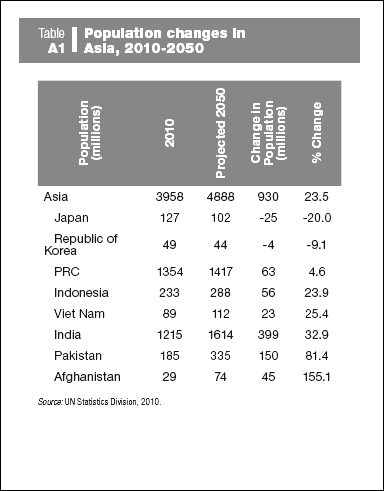 By the middle of this century, an additional 3 billion Asians could enjoy higher living standards, but only if Asia sustains its present growth momentum and addresses daunting multigenerational challenges and risks, says a new report commissioned by the Asian Development Bank (ADB).

The draft report says that as the global economy’s center of gravity shifts toward Asia, the region could account for about half of global output in 2050, up from the current 27%, as well as half of global trade and investment.

The overview of the draft report, “Asia 2050—Realizing the Asian Century,” was unveiled at ADB’s 44th Annual Meeting in Ha Noi, Viet Nam and will be a topic of discussion among participants at the Governors’ Seminar, including the finance ministers of Bangladesh, France, India, and the Republic of Korea; the vice finance minister of the People’s Republic of China (PRC); the governor of the State Bank of Viet Nam; the parliamentary secretary for finance of Japan; and ADB President Kuroda.

The draft report compares the potential outcomes for Asia under two competing scenarios: the Asian Century and the Middle Income Trap. In the more optimistic Asian Century scenario, the region’s gross domestic product (GDP) would soar to $148 trillion and account for 51% of global output in 2050. On a purchasing power parity basis, GDP per capita in Asia would rise to $38,600, compared with the projected 2050 global average of $36,600.

The alternative scenario assumes that Asia’s fast-growing economies—the PRC, India, Indonesia, and Viet Nam—will fall into the middle income trap of slowing growth rates and stagnating income levels over the next 5 to 10 years. Furthermore, none of Asia’s slow-growing economies would manage to accelerate its growth rate under this scenario. If these events occur, Asia would account for only 32%, or $61 trillion, of global GDP in 2050. On a purchasing power parity basis, GDP per capita would rise to only $20,300, or just over half of that under the Asian Century scenario.

By 2050, Asia will constitute about 53 percentof the global population

“The difference in outcomes under the two scenarios and thus the opportunity cost of not realizing the Asian Century scenario is huge, especially in human terms,” Mr. Kuroda said.

Under the Asian Century scenario, almost 3 billion additional Asians would enjoy the fruits of prosperity at least one generation earlier than under the Middle Income Trap scenario.

While developing Asia has made significant strides in tackling income poverty, non-income poverty still remains pervasive. For example, half of all Asians live without basic sanitation while 900 million people in the region have no access to electricity.

The draft report highlights the challenges and risks that lie in the path of Asia achieving its development potential by the middle of this century and outlines the corresponding strategic decisions and actions facing Asian policy makers at the national, regional, and global levels.

The draft report overview was prepared specifically for ADB’s 2011 Annual Meeting. Following discussions of the report at the gathering, a comprehensive book will be published in August.

By 2050, Asia will constitute about 53 percentof the global population, a little smaller than its 57percent share in 2010, but with nearly 1 billion morepeople than today.

Any population growth inNortheast Asia stems predominantly from PRC—butin percentage terms PRC’s population will have onlygrown by 4.6 percent in the 40 year period betweennow and 2050.Southeast Asia is expected to grow faster thanthe Asia average and to add about 174 million peopleby 2050. In the period 2010 to 2050, Indonesia willhave grown by nearly 24 percent, adding 55 millionpeople to its total, and Viet Nam by over 25 percentwith 23 million more.

Central Asia will add around 85 million peopleby 2050. It will be growing from relatively smallerabsolute numbers—but in percentage terms thissubregion, especially Afghanistan and Iran, will begrowing dramatically. It is estimated that Afghanistan’spopulation will skyrocket from its current 29 millionto 74 million; Iran will add about 22 million to its totalpopulation.

In 2050, Asia will be heavily influenced by therelative demographic weight of South Asia. Alreadyby 2023—roughly a decade from now—South Asia(with India) will be more populous than Northeast Asia(which includes PRC). By 2050, Pakistan will haveadded more than twice the amount of people thanPRC to the total Asian tally. The balance of Asia’spopulation will have shifted from Northeast Asia toSouth and Southeast Asia.