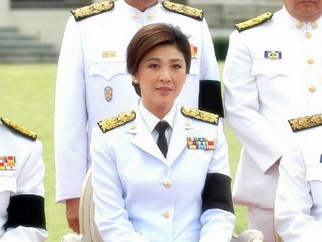 Thailand’s Prime Minister Yingluck Shinawatra has confirmed that the government will implement the policy to increase the daily minimum wage to 300 baht while asking the society to wait and see its result.

Speaking at Parliament, Ms Yingluck countered the attempt of the opposition to interpret the wordings used in the policy statement concerning the minimum wage hike. She stressed that she was sincere in raising the minimum wage to enable labourers to have higher income and wanted the society to watch the result of her policy rather than trying to find fault with the description in the policy statement.

The prime minister believed that people will listen and understand this issue despite the opposition’s interpretation. She said she is intent on pushing forward the policies announced during her election campaigns into implementation.

Ms Yingluck noted that some details of the policies might change when it comes to the actual operation while the policy statement is just to elaborate the general framework. She however stressed that the intention of her Pheu Thai Party announced in election campaigns remain the same.

To support the new governement wage policy Jiyuan Wang is Director of the International Labour Organisation’s Country Office for Thailand, Cambodia and Laos wrote an opinion column in the Bangkok Post.

The ILO’s analysis of global wages over the past 30 years reveals three clear trends. The share of wages in gross domestic product is falling while the share going to profits is rising; workers are reaping an ever smaller part of the national wealth.

In addition, wage growth is not keeping up with labour productivity growth, resulting in flat or diminishing real wages for most workers. Finally, income and wage inequality within countries, between the highest and lowest paid, is increasing.

Thailand’s economic performance is strong. It is a world leader in manufacturing, food products, mining and tourism. Profits of companies listed on the Stock Exchange of Thailand as well as for foreign investors are robust.  Unemployment is around 1.2%, and demand for workers is very high.

Average real wage growth has been flat for most workers. Minimum wage rates have not kept up with inflation over the past 10 years. The country’s Gini coefficient _ the measure of income inequality _ is 0.43, among the highest in Asia.