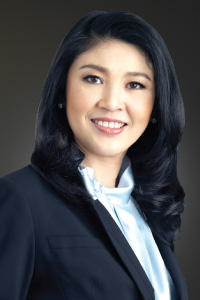 Speaking about some consumer goods whose prices remain the same despite the reduced oil prices, Ms Yingluck stated that the reduction is only the beginning of efforts to curb consumer prices. She said her deputy Kittirat Na Ranong will seek talks with many entrepreneurs to seek cooperation on the issue.

Asked if the government will order the private sector to comply with its demand or not after some private bus operators still refuse to cut bus fare, the prime minister responded that she preferred to use negotiations while prices of some products must be floated according to the market mechanism.

Regarding the policy to increase the difference between benzene and gasohol prices to support alternative energy, Ms Yingluck responded that the government actually wants to support gasohol in the long term, but so far, the oil price structure had not been allowed to develop according to the market mechanism.

The prime minister explained that three types of oil now have their prices reduced, but the true objective of the government is to reduce living cost for people; therefore, several strategies will be used to adjust product prices in line with the market mechanism.

Ms Yingluck reaffirmed that the government will support people to use gasohol. Asked if the government will cut gasohol prices, she replied that it is possible as Energy Minister Pichai Naripthaphan and Finance Minister Thirachai Phuvanatnaranubala will bring the issue to the cabinet.

But questions have risen concerning the consequences and the long term viability of such populist policy.

In return for a boost to consumer confidence and the party’s popularity, tax cuts on pretrol is spreading public doubts about the country’s commitment to renewable energy.

As part of the alternative energy policy, since 2007 Thailand has encouraged both consumers and petrol retailers to migrate to ethanol types, called gasohol, to reduce imports

We wonder whether the government has done a careful study before slashing contributions by refineries to the Oil Fund, causing prices at the pump to go down by as much as 8 baht a litre last Saturday.

According to Energy Minister Pichai Naripthaphan, contributions and value-added tax have been cut by 3 baht a litre for diesel, 7.17 baht for 91 octane petrol and 8.02 baht for 95 octane petrol.

PM Yingluck Shinawatra said the cuts were part of the government’s policy commitments announced in Parliament last week, and would help ease expenses for the public.

While the temporary price cuts are welcomed by car users, we are concerned about their impact on the country’s development of alternative fuels, particularly farmers who grow crops for bio-fuel.