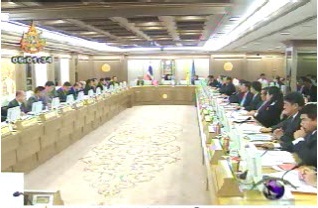 The Cabinet on Tuesday approved a budget deficit of Bt350 billion  ($11.6Bn) for the 2012 fiscal year, starting Oct 1, according to Finance Minister Thirachai Phuvanatnaranubala.

Of the total budget, annual government spending was approved at Bt2.33 trillion, an increase of 7.4 per cent from the fiscal 2011 budget at Bt2.1 trillion.

The investment budget, counting for 16.5 per cent of the overall budget, was agreed at Bt380 billion, a 8.1-per cent increase year-on-year.

The total budget approved was based on economic conditions in 2012 forecast to expand at 4.5-5.5 per cent and have inflation rates at 3-4 per cent.

In this regard, Deputy Finance Minister Boonsong Teriyapirom said among other issues the Cabinet approved on Tuesday were an extended period for a diesel tax cut and the Pheu Thai Party’s first-car project.

The fuel tax cut, which is to last until Dec 31, will affect Excise Department revenues of Bt25 billion, but the government is trying to maintain the tax rate at Bt0.0050 from the current rate of Bt5.31, Mr Boonsong said.