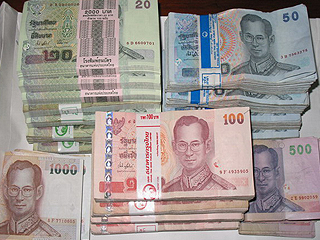 Thailand’s Consumer Price Index CPI in September was 112.86, down 0.33 per cent from August, its first drop in 11 months as major factors contributing to the slight decline were the government’s measures to reduce the cost of living and commerce ministry measures on price controls, according to Yangyong Puangrach, Permanent Secretary for Commerce.

Food and beverage prices fell 0.65 per cent, while prices of other commodities in September dropped 0.96 per cent owing to a drop in retail fuel prices of 8.02 per cent on average. Public transportation fares dropped 0.99 per cent in line with global oil prices and government policies.

However, inflation in September rose 4.03 per cent year-on-year while inflation in the first nine months this year climbed 3.75 per cent, compared to the same period last year.

The permanent secretary for commerce said three major factors which will have a further impact on inflation were suspending the temporary levy on 91 octane, 95 octane and diesel fuel, the appreciation trend and the interest rate policy likely to be maintained at the Oct 19 meeting of the Bank of Thailand BoT monetary policy committee MPC.

via September inflation drops 0.33 per cent from August: Commerce Ministry.

Thailand to Cope with Impacts from Volatility in Financial Markets