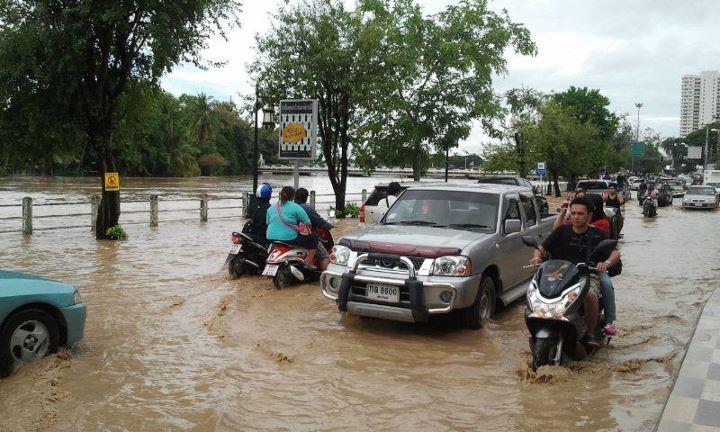 Thailand’s central bank, the Bank of Thailand (BoT), has initially assessed flood damage nationwide at Bt20 billion, lower than losses sustained in last year’s flooding, and predicts only a slight affect on the country’s economic growth, according to BoT Governor Prasarn Trairatvorakul.

Mr Prasarn, however, said the bank will be monitoring the situation for further review as floods continue to wreck havoc in many provinces with no sign of easing.

He said an extensive area of farmland in the central region was heavily damaged but crop losses there are to be offset by the likelihood of the large volume of rain in the northeast making likely future good harvests, making up for losses of cash crops in the central plain.

Most worrisome at present, he said, is the hardships that flood victims face, and the necessary long-term measures to solve problems and rehabilitation. The central bank has instructed commercial banks to prepare measures to help their customers affected by the floods.

At least 244 people have died in the monsoon flooding that has gripped Thailand for two months, according to the latest update from government officials and emergency services.

The BoT governor said the floods have no significant impact on the growth of credit service of the commercial banks but the downward trend of the global economy would affect commercial banks’ credit approval.

It was estimated that the growth of the commercial banks’ credit in 2012 would shrink to 7-8 per cent compared with the first half of 2011 which enjoyed more than 10 per cent growth.

Economic losses from the floods and weakening overseas demand for Thailand’s electronics, textiles and agricultural goods may complicate Yingluck’s government pledge to raise the minimum wage to 300 baht. Flood damage may reach 50 billion baht ($1.6 billion), the University of the Thai Chamber of Commerce estimates, stiffening resistance to mandated pay increases.

As Thailand continues to deal with record flooding, officials there are also worried about a flood of babies in maternity wards.

The French press agency reports condoms are being rushed to hard hit areas along with other medical supplies.

Local volunteers say villagers have nothing to do, so a baby boom is expected.