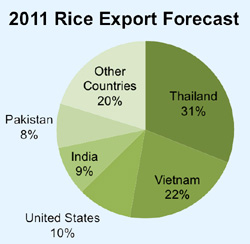 A new paddy-pledging programme in Thailand that has already pushed up the cost of rice globally will go into effect on 7 October, amid uncertainty and scepticism. The move by the world’s leading exporter has stirred humanitarian concerns far beyond Thailand’s borders, particularly for rice-consuming countries that do not produce much at home.

The government plans to pay its farmers more than double the market value for rice. “We have been very concerned about this, mostly because this is going to affect [African] markets – definitely,” said Aliou Diagne, an economist with the Benin-based Africa Rice Center. USAID last month warned that prices were likely to climb 20 percent over the next three months, while others predict the greatest short-term impact has already been felt.

What happens next, economists say, depends on how Thailand implements the programme. In the long term, analysts said they expect it to encourage other countries to step up exports and thus dampen the price of rice – consumed by three billion people daily.

But some say what Thailand is doing is unsustainable, and doubt it will last long.

“This is going to be detrimental to the rice sector in Thailand, especially in the long term,”

said Concepción Calpe, a senior economist with the UN Food and Agriculture Organization FAO in Rome.

“They’re pricing themselves in a manner that doesn’t make them competitive.”

Under the plan – a campaign pledge by recently appointed Prime Minister Yingluck Shinawatra – the government is raising the minimum guaranteed price for farmers by more than 60 percent, to 15,000 baht, or US$480, per ton.

“If the farmers have more income, they will spend more money in the economy,” she said. “When we spend more, the GDP will definitely increase – significantly.”

But it has drawn criticism over whether it is an effective policy for Thailand and the best way to help farmers. Because payments are linked to production, the bigger farmers stand to gain most, Samarendu Mohanty of the International Rice Research Institute in the Philippines, said.

Subsistence farmers may even be hurt by the scheme, as it could push up input costs. The best way for governments to support smaller farmers was through programmes that did not link payment to production, said Mohanty, who researches rice policy and trade as head of IRRI’s social sciences division.

“That way you are not distorting the market, domestic or global,” he said, “and you still support the farmer.”

If there is a surplus

The higher price would likely lead to a surplus, as Thai farmers produce more and Thai people buy less, said Mohanty. “The impact on the global market depends on what they [Thai officials] do with this surplus.”

Thailand has two options: it can aggressively sell the surplus rice in foreign markets – at a loss. This would cost Thai taxpayers billions of dollars, he said, and likely drive global rice prices below what they would have been without the pledging scheme.

“Then basically the Thai government has decided to subsidize the rest of the world,” said David Dawe, a senior economist at the FAO in Bangkok. “Everybody’s happy except for the Thai taxpayer.”

Alternatively, Thailand can export the amount of surplus rice at a price to cover its costs, implementing cost-control measures and storing the remaining rice. This could lead to higher prices worldwide, Mohanty said. But they would not last long, because other countries would increase their rice exports in response, which could be good for long-term food security.

“On the bright side, this process could provide an opportunity for countries with abundant land and water, such as Cambodia, Myanmar and Brazil, to emerge as alternate suppliers to the global rice market,”

Global rice prices have risen by about 20 percent since May. The recent lifting of a government ban on rice exports in India, which frees up two million tons of rice for international trade, has helped temper the impact. But there is speculation that rice is being hoarded in anticipation of higher profits.

The countries most vulnerable to price increases are those that rely on imports and have limited local production: coastal countries in West Africa, Central America, Djibouti, Somalia and Haiti, according to USAID.

In response to the 2008 global food crisis, African countries have been investing in local rice production, measures that guard against outside volatility, Diagne said. Rice production has grown 9 percent each year across Africa.

But many countries still depend heavily on imports, with as much as 80 percent of rice consumed from foreign markets. “So any fluctuation in prices is felt right away,” Diagne said.

In Somalia, the new Thai rice policy is one of several factors expected to increase the number of people in crisis in 2012, said Tamara Nanitashvili, a food security technical manager at FAO Somalia. More than half the country depends on rice as a main food staple. Rice prices also act as a ceiling for cereals such as maize and sorghum.

In addition, rice comprised 9 percent of the World Food Programme’s 2010 food purchases, spokesman Marcus Prior said. Volatile food prices are a big challenge, he said, but forward-purchasing acts as a protective measure.

• Rice is the staple food for more than half the world’s population, including 640 million undernourished people living in Asia.

• For every one billion people added to the world’s population, an additional 100 million MT of rice needs to be produced every year.

• Rice is uniquely suited to wet environments in which other crops would not survive; hence its widespread popularity across Asia.

• Projected demand for rice will outstrip supply in the near to medium term unless something is done to reverse current trends.

• Rice consumption exceeds 100kg per person per year in many Asian countries.

• One-fifth of the world’s population, more than one billion people, depend on rice cultivation for their livelihood.

• Asia, where about 90 percent of all rice is grown, has more than 200 million rice farms, most of which smaller than one hectare.

• Rice is the fastest-growing food staple in Africa and one of the most important and fastest growing staples in Latin America – both regions are net importers.

• In most of the developing world, rice availability is equated with food security and closely connected to political stability.

• The top five exporters are: Thailand, Vietnam, Pakistan, US and India.

• Average global rice yields are around four tonnes per hectare, but yields of more than 10 tonnes a hectare have been recorded.