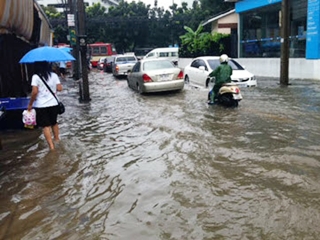 Thailand’s initial losses in nationwide flooding were estimated at Bt60-90 billion or 0.6-0.9 per cent of Gross Domestic Product GDP, according to Finance Minister Teerachai Puwanartnaranubala.

The minister made his announcement after meeting with Commerce Minister Kittirat Na-Ranong and other officials dealing with the emergency.A loss of some Bt60 billion, or 0.6 per cent of GDP, was indicated by The Bank of Thailand, however the Office of the National Economic and Social Development Board NESDB assessed the loss at Bt80-90 billion or up to 0.9 per cent of GDP.

Concerned agencies must evaluate the cost of damage again as flooding continues and the cost might be lower than projected by the NESDB, the finance minister said. Somchai Sujjapongse, Director of the Fiscal Policy Office, said the current flooding is likely to shrink gross domestic product GDP growth in 2011 to 3.7 per cent from the 4.5 per cent forecast in June before the flood crisis.

He said as of Oct 9, flooding caused losses to Thailand’s economy of about Bt69 billion and a 0.6 per cent drop in GDP. Combined with a 0.2 per cent fall resulting from economic problems in Europe and the US, overall GDP is likely to fall by 0.8 per cent.

Even more damage could occur if the flooding is prolonged. The worst scenario can be the damage cost as high as Bt120 billion.Flooding will also negatively impact tax collection in 2012 with a loss of about Bt12 billion. However, Mr Somchai believed that consumer purchases will rise and income will be higher than losses due to the government’s economic stimulus measures, the procurement of machinery and flood rehabilitation activities.