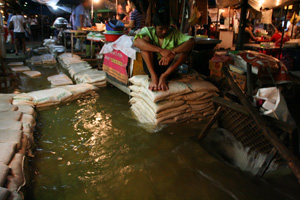 Thai flood’s damage is likely to cost at least Bt100 billion and perhaps even amount to more than Bt200 billion and to shrink the country’s gross domestic product (GDP) by 2%, Kirida Bhaopichitr, World Bank senior economist for Thailand said.

Thai economic growth in the fourth quarter is projected to be negative. However, the World Bank must continue monitoring the situation for further assessments as the flood crisis has not ended yet.

Thai economic growth will be revised downward about December, from earlier projected growth of 3.7 per cent.

But the Thai economy in 2012 is likely to expand more quickly than the World Bank’s projection at 4.2 per cent indicates due to Thailand’s post-flood rehabilitation projects now being considered, which will boost economic activities in the country as well as GDP growth, Ms Kirida said.

In the short term, foreign investors will not relocate their production bases elsewhere as Thailand’s basic infrastructure and regulations facilitate investment. Currently Thailand ranked 17th having moved upward from its 19th ranking among 183 countries in the World Bank Doing Business Report on measures of whether regulations make doing business easier or harder.

For the medium- and long-term, foreign investor decisions depend on the government’s post-flood measures and new standards to protect industrial estates from flooding in the future.
The World Bank believes it is time for Thailand to have and apply effective water management because from 2014-2015, China will start operations of five or six dams which will affect water conditions further downstream in the Mekong River and in Thailand.

Bank of Thailand: Q4 growth could be negative