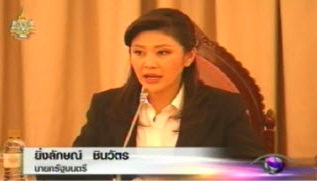 Prime Minister Yingluck Shinawatra on Tuesday announced “Strategic Measures for the Country’s Rehabilitation” – a three-phase post-flood action plan to build confidence, regain trust, and restore the country’s prosperity and stability in the long-term in a manner that is sustainable and systematic.

Speaking at a news conference at the Santi Maitree Building in the Government House compound, Ms Yingluck said the government’s strategy for the country’s rehabilitation was divided into three phases or 3Rs – Rescue, Restore and Rebuild.

“Strategic Measures for the Country’s Rehabilitation” – a three-phase post-flood action plan to build confidence, regain trust, and restore the country’s prosperity and stability

She said the immediate phase or ‘Rescue’ would be completed within 1-2 months depending on the flood situation. This stage would be the responsibility of Justice Minister Pracha Promnog as chair of the Flood Relief Operations Centre FROC.The second phase – Restore – which is a short-term phase, will start its operation after the floodwaters have receded and will be complete within one year.

This phase will cover rehabilitation and remedies to the economy, infrastructure and quality of life of the people. Deputy Prime Minister and Interior Minister Yongyuth Wichaidit will oversee the task.The third phase – Rebuild – the long-term phase would involve actions to build confidence, regain trust, and restore the country’s prosperity and stability, she said.This task would be divided under the supervision of two committees, the Strategic Formulation Committee for Reconstruction and Future Development SCRF and the Strategic Formulation Committee for Water Resources Management SCWRM. A number of eminent persons and leaders in business sector were appointed as members.

She said the government has invited former finance minister Veerapong Ramangkura to chair SCRF while Deputy Prime Minister and Commerce Minister Kittirat Na-Ranong, on behalf of the premier, would chair the SCWRM.Eminent persons with knowledge and expertise on water management will also be appointed as members while Dr Sumet Tantivejkul, head of the Chaipattana Foundation implementing royal projects, was invited to be an advisor.