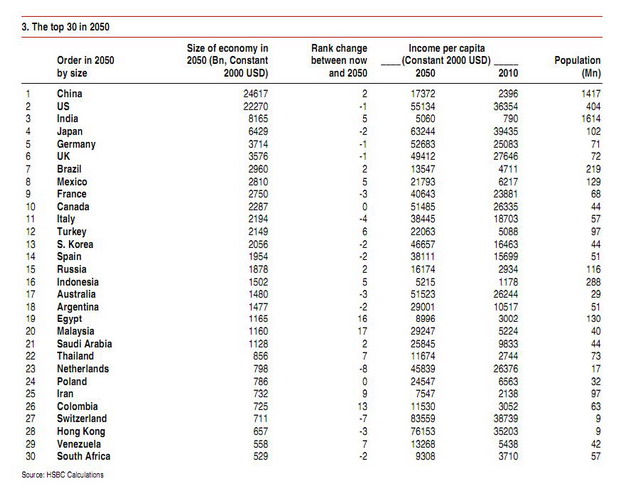 Thailand would be the world’s 22nd largest economy in 2050, being one of several emerging economies which will join the top 30, according to HSBC’s Global Research Report “The World in 2050, Quantifying the shift in the global economy”.

The report found that 19 of the top 30 economies will be countries that are currently ’emerging’ and China and India will be powering global growth over the next four decades while countries as varied as Nigeria, Peru and the Philippines will also be playing a significant part. Thailand’s economic size is expected to more than quadruple from US$187 billion in 2010 to $856 billion in 2050.

With the rapid growth of the emerging markets, the global economy is experiencing a seismic shift. But why is this change occurring? Will it continue? And how will the world look if it does? The answers to these questions are important for investors’ decisions today. In this piece, HSBC provides a framework for thinking about these issues. Based on our analysis of the Top 30 economies ranked by size of GDP in 2050, our conclusions are as follows:

World output will treble, as growth accelerates on the back of the emerging economies. On average, annual world growth is projected to be accelerate towards 3% compared with growth of just over 2% in the 2000s (Chart 1). Emerging-world growth will contribute twice as much as the developed world to global growth over this period.

The report found that the Philippines is set to become the world’s sixteenth-largest economy, up 27

This may have implications for the ability of these economies to influence the global policy agenda. Already Europe has been forced to concede two seats on the IMF’s executive board in order to make way for some emerging economies. This adds a whole new dimension to the current Eurozone crisis, and provides a significant incentive to euro-area countries to work through their current difficulties and remain a union.

Demographic change is even more dramatic outside of Europe. The working population will rise by 73% in Saudi Arabia and fall by 37% in Japan. By 2050, the seismic shift in the global economy will have only just begun. Despite a seven-fold increase (Chart 5), income per capita in China will still be only 32% of that in the US and scope for further growth will be substantial.

This ‘base effect’ must be considered when comparing current growth in the emerging world with that of the developed world. Energy availability need not hinder this path of global development so long as there is major investment in efficiency and low-carbon alternatives. Meeting food demand may prove more of a challenge, but improvements in yield and diet could fill the gap.