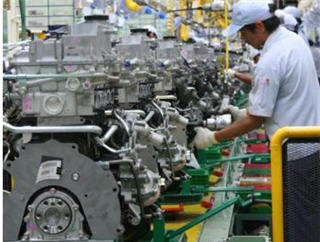 Thailand’s Manufacturing Production Index (MPI) for last month, December, dropped 25.8 per cent year-on-year as a result of the country’s devastating flood crisis, according to the Office of Industrial Economics (OIE).

OIE Deputy Director General Aphiwat Asamaporn announced Friday that the December MPI decreased to 139.78, down 25.8 per cent, compared to the same period in 2010, due to the flooding in Thailand’s central provinces in late 2011 which submerged major industrial estates and negatively affected industrial entrepreneurs.

Meanwhile, the Capacity Utilisation Rate in December also stood at 52.3.

Despite the drop in the Dec MPI, the figure reflected a good sign of recovery, Mr Aphiwat said, explaining that the index contracted less and the Capacity Utilisation Rate rose.

Auto production and sales decreased by 30.4 and 30.9 per cent year-on-year respectively as the floods caused a supply chain disruption.

Regarding the hard disk drive industry, manufacturing dropped 55.7 per cent while total sales fell 60.5 per cent due to industrial estates where Thailand’s hard disk drive production is centred, suffered from the severe flooding.

Meanwhile, the production and sales of bottled drinking water edged up by 12.9 and 13.6 per cent respectively compared to the same period in 2010 thanks to growing demand on the part of consumers during the post-flood period.

Thai economy bottomed out in November, to rebound from Decembre (FPO)