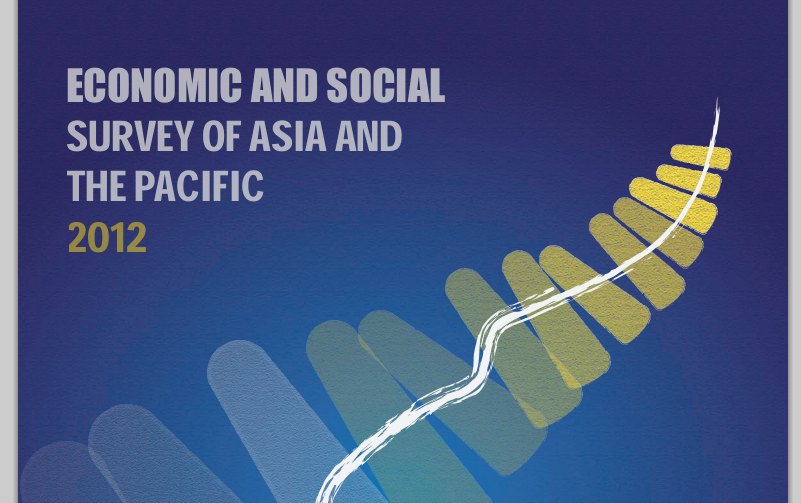 Asia and the Pacific faces another year of slowing growth as demand for its exports falls in developed nations and capital costs rise, but the region will remain the anchor of global economic stability, according to latest United Nations projections.

Asia and the Pacific faces another year of slowing growth as demand for its exports falls in developed nations and capital costs rise, but the region will remain the anchor of global economic stability, according to latest United Nations projections.

“The Asia-Pacific region continues to face a challenging external environment, which is why the focus of the 2012 Survey is to map the landscape to help steer through turbulence and volatility. This Survey provides a valuable tool to pursue a sustainable pathway for shared prosperity in Asia-Pacific,” said United Nations Under-Secretary-General and Executive Secretary of ESCAP, Dr. Noeleen Heyzer while launching the Survey in Bangkok.

Reduced demand in the region’s traditional export markets resulting from the eurozone debt crisis and continued economic uncertainty in the United States of America, together with higher capital costs and loose monetary policies of some advanced economies will contribute to the slowing of Asia-Pacific growth in 2012, notes the Survey.

Despite the slowdown, the region will remain the world’s fastest growing with China forecast to grow at a robust 8.6 per cent, decelerating from the 9.2 per cent rate of 2011. Growth in India is projected at 7.5 per cent in 2012, up from 6.9 per cent in the last fiscal year.

“Growth in Asia and the Pacific remains better than in any other region – continuing as an anchor of stability and a new growth pole for the world economy. South-South trade with Asia-Pacific in 2012 will help other developing regions, such as Africa and Latin America, further reduce their dependence on low-growth developed economies,” Dr. Heyzer said.

The Survey highlights a number of key policy challenges and options for Asia-Pacific countries – amongst them: managing the balance between growth and inflation, using several inflation fighting measures beyond monetary policy alone; coping with capital flows and dealing with considerable exchange rate volatility, and; addressing jobless growth and unemployment by encouraging domestic consumption to act as an enhanced engine of growth and productivity, improving working conditions and income equality.

Although many economies in South-East Asia are severely affected by the global downturn, the subregion is forecast to see a slight increase in growth to 5.2 per cent, driven by strong recovery in Thailand following the devastating floods in the country last year.

ESCAP projects growth in East and North-East Asia to slow to 7.1 per cent from 7.6 per cent in 2011, while North and Central Asia is forecast to experience a relatively modest decline in growth to 4.3 per cent in 2012, thanks to high energy prices. Lower aggregate growth of 5.7 per cent is projected for Pacific island developing economies in 2012, due mainly to lower growth in Papua New Guinea.

Growth in South and South-West Asia is forecast to remain constrained at 5.8 per cent in 2012, largely due to inflation fighting monetary tightening, as compared to 6.7 per cent in 2011.

“This commodity boom presents risks and opportunities. Less-developed economies should resist the impulse towards commodity specialization, which in turn can delay industrialization, economic diversification, and the building of productive capacities,” Dr. Heyzer said.

“Tight global supply coupled with financial speculation in the commodity markets, global liquidity and non-economic supply shocks, such as political instability in oil-producing countries, are likely to produce a ‘new normal’ of persistent volatility and a long-term rise in commodity prices,” Dr. Heyzer said in her preface to the Survey.

Another priority for the region is to make growth more inclusive. Levels of income inequality have grown by a worrying 15 per cent in developing Asia-Pacific economies since the 1990s.

“Social progress in Asia and the Pacific has been hampered by increasing income inequality. Achievement of measures of the health-related and educational aspects of human development, when adjusted for inequality, is considerably lower for many countries in the region, ranging from a potential loss in achievement of 10 per cent to 30 per cent,” Dr. Heyzer said.

More than 1 billion workers in the region are in vulnerable employment with developing countries failing to generate sufficient work opportunities in the formal sector, notes the Survey. Young people are three times more likely to be unemployed than adults with the region’s youth unemployment rate projected to remain at 10.2 per cent in 2012.

“The good news is that most countries are in a favourable position to undertake a wide range of actions to stimulate and rebalance growth to make it more durable and better serve those most in need,” Dr. Heyzer said.

Please find the Economic and Social Survey of Asia and the Pacific 2012 at: http://www.unescap.org/survey2012

* *** *
Headquartered in Bangkok, United Nations ESCAP is the largest of the UN’s five Regional Commissions in terms of its membership, population served and area covered. The only inter-governmental forum covering the entire Asia-Pacific region, ESCAP works to promote sustainable and inclusive economic and social progress. More information on ESCAP is available at www.unescap.org
Related Topics:unescap
Up Next