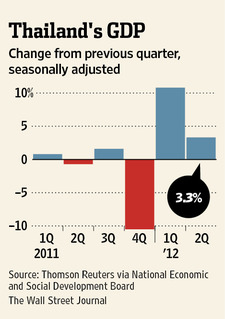 The Kasikorn Research Centre projected that the Thai economy in the second half of this year will likely to grow 7-9 per cent despite risks such as export slowdown, inflation and a possible higher production cost.

In the second half of this year, the centre sees the Thai economy expanding within a range of 7-9 per cent, compared to last year’s low economic performances impacted by a devastating flood.

The Thai economy has been driven by government spending but exports are still at risk. Private sector spending may slow down after having sped up during the post-flood period in the first half of this year.

Meanwhile, production cost and inflation may rise, so the centre has retained its projection of Thai economic growth at 4.5-5.5 per cent.

The centre saw the Thai economy growing only 2.2 per cent in the first half of this year due to accelerating spending of the government and private sectors and recovery of industrial production.

The industrial production in the first half of the year grew 4.2 per cent, compared to the same period last year, higher than the 0.4 per cent growth registered in the first quarter